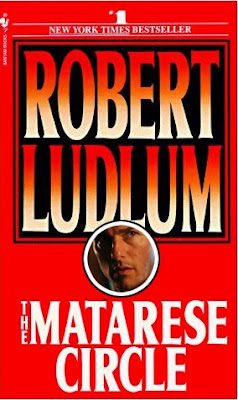 The Cruise Agenda
With no new Mission: Impossible picture in the immediate offing, Tom Cruise seems to be attaching him to every spy movie in development, so I guess it should come as no surprise that he's now circling the Robert Ludlum adaptation The Matarese Circle. Denzel Washington is already attached, as is director David Cronenberg. Variety says, "Cruise will go mano a mano with Washington as two bitter enemy spies who, after spending two decades trying to kill each other, grudgingly team up against the Matarese, a powerful group at the root of a conspiracy."
Presuming that Washington is still portraying American agent Bradley Scofield (as was originally reported), the other character in Ludlum's novel is Russian spy Vasili Taleniekov. But the trade reports that writers Michael Brandt and Derek Haas have "contemporized Ludlum’s original Cold War premise," so maybe the other character is no longer Russian and we won't see Cruise attempting the accent. MGM is aiming for a 2010 release.
Variety reminds us that "Cruise had been mentioned as the potential star of several plum projects around town before the pairing with Washington solidified"; presumably The Champions is among those plum projects, and Cruise's commitment to Matarese means he's no longer involved in that. The trade indicates the star's next film is still expected to be The Tourist, yet another spy thriller!
The Variety story also claims that "in the original $3 million deal made for the Ludlum title, MGM also acquired The Matarese Countdown, giving the studio a shot at creating a franchise, as Universal did with Ludlum’s The Bourne Identity." This runs counter to what was originally reported, which was that the studio did not go for Ludlum's sequel, but instead hoped to develop a franchise based on original sequels to the first title.
Whether or not Tom Cruise actually signs onto The Matarese Circle, this is definitely one of the highest profile spy projects currently in development, and definitely one of the ones I'm most excited about! I'm so glad that Hollywood has finally discovered the potential of Robert Ludlum!

UPDATE: The Hollywood Reporter has a story on the matter, too, and they assert that Cruise will be playing Taleniekov: "Cruise is in final negotiations to take on the role of the Russian spy Vasili Taleniekov, the mortal enemy of American intelligence operative Brandon Scofield (Washington)." Of course, they could just be surmising this.
Christopher Nolan Is Not a Prisoner; He Is a Free Man
Variety also reports that red-hot Dark Knight director Christopher Nolan has chosen his next film... and, sadly, it's not The Prisoner. Instead, the Nolan will direct a "contemporary sci-fi actioner" called Inception. A movie version of the cult classic Patrick McGoohan spy series was among the other projects the director was considering. While the movie was completely unrelated to the AMC TV remake, it's possible that the existence of that Prisoner was a nail in the coffin of the potential Nolan version. Too bad. I was really looking forward to seeing a Christopher Nolan Village.
Posted by Tanner at 11:26 PM

Yeah, MGM won those rights for $3 million early last year in an intense bidding war. A few other Ludlum projects were also set up around town prior to the Universal deal, including an Osterman Weekend remake at Summit and The Chancellor Manuscript at Paramount. Click on the "Robert Ludlum" tag at the bottom of this story and you can read about all of those deals.

It's my understanding that even the new Universal pact is a first look pact, not an exclusive one. So Uni has the first shot at any project that Ludlum Entertainment packages, but if they're not interestd, then Ludlum Entertainment can shop it around at other studios, too.