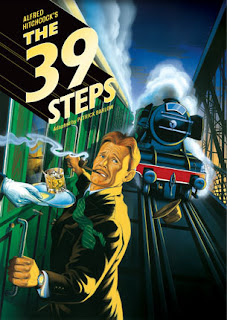 
When the comedic stage adaptation of the classic John Buchan spy novel and Alfred Hitchcock film opened on Broadway two years ago, I lamented being stuck in Los Angeles, far away from America's theater capital.  (In my frustration, I may have even used the term "smog-bubble" to describe a city I actually love. For this I now apologize.)  Well, now Angelenos can finally enjoy this production that's played London and New York and elsewhere to rave reviews.  "The 39 Steps" is running at LA's Ahmanson Theater downtown from April 27 to May 16, 2010. Nodding to the book, but apparently owing more to the first of several film adaptations of the material, The Hollywood Reporter noted when it opened on Broadway that "this particular adaptation is an almost scene-for-scene spoof/interpretation of Hitchcock's 1935 movie version

that starred Robert Donat and Madeleine Carroll." The procuction uses a cast of only four actors and minimal sets to, apparently, great effect. Tickets are available through the Ahmonson's website.
Posted by Tanner at 3:55 PM