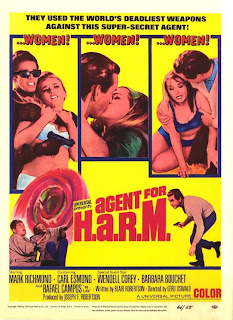 This is another film in that curious genre I like to refer to as “American Eurospy.” Like Dimension 5 and A Man Called Dagger, it’s Poverty Row James Bond made right here in the US of A. All the low budget smarm of a Eurospy film, with none of the great locations or the charm that the Europeans manage to add to the scenario.

Agent for H.A.R.M. begins with an extra in a helmet that’s way too big for him playing at being a Russian soldier. He’s in that part of Russia that looks a whole lot like California, and it’s day where he is, but it seems to be night where the heroes are running way from him... or is it day again? It’s both. The hero we’re concerned with is secret agent Adam Chance (TV veteran Mark Richman), a slightly past-it superspy with a penchant for sweaters and a propensity to spew hard-boiled aphorisms like a bad dime detective from an earlier decade. His preferred spywear is not a tuxedo or a jumpsuit, but a yellow sweater over an electric blue mock turtleneck, and he’s got really weird hair–like a comic book character–with a white stripe through its front. His advice to young secret agents is, “Don’t rely on charm. You might get your head blown off,” and he clearly subscribes to it, because he’s about as charmless a character as one can imagine. That said, the young lady to whom he’s gruffly imparting this advice seems enamored, so perhaps there’s something to it. Charmless, over-the-hill sweater-lover: that’s all anyone really needs to know about Adam Chance.

Once he gets away from those California dress-up Russians, we’re treated to a pretty cool title sequence (for the budget, that is) before launching into the usual story, involving a silly MacGuffin gun and a briefing with the boss, who’s minded to by a second-rate Moneypenny. One thing I’ll credit the American Eurospy movies for that the actual Eurospy movies rarely managed to achieve: the boss has all solid walls to his office. (It’s a common trait of budget-conscious Euro productions to skimp on unimpressive sets like the boss’s office in order to pinch their dollars for the villain’s lair, and one wall of the boss’s office is invariably comprised of a curtain rather than expensive balsa wood.) Chance’s boss, Graff (who for some reason answers his phone with the barked greeting, “Mickey Mouse ”), not only has four walls (well, at least three, anyway), but one particularly nifty one with a dartboard over wood paneling that slides up to reveal a TV screen map! That’s right, a TV screen map, not just a paper one. This MacGuffin gun is not a ray gun, for once, but a spore gun. I couldn’t begin to do justice to what, exactly, it’s capable of, so I’ll let Chance explain:

Chance: Jim, I’ve analyzed what’s left of Manson. He was shot with spore bullets made out of some kind of a glycerin compound which fed on the body and turned him into a fungus.

Graff: What about this fungus? Does it infect? 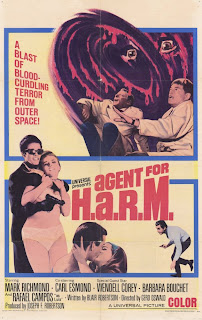 The alarmed Graff is on the right track, because the villain’s plan is to dust America’s crops with an alien spore from a meteorite so that Americans will unwittingly bake it into their apple pies and then have their flesh melted into green spinach souffle. Luckily, Chance discovers that “the antidote is a cryohemic,” so maybe that means the apple pie thing won’t happen? It’s tough to say for sure. Whatever the case, that meteorite bit is the full extent of the "blast of blood-curdling terror from outer space" that he U.S. one-sheet is so intent on promoting. 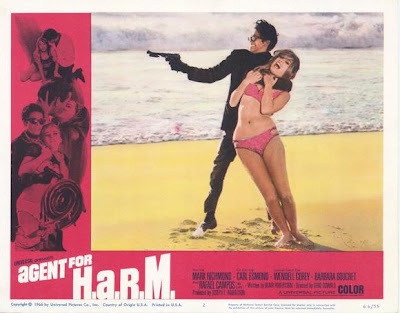 ’s beautiful Barbara Bouchet) who conveniently “knows something of biochemistry” and bad guys (including Robert Quarry in a cravat) who want to kill them. The producers get a lot of use out of a single strip of California beach which plays both Italy (where Richman proves that it’s tough to look debonaire when pouring sand out of your shoe) and itself (where he shoots it out with a boat-car-driving baddie whose penchant for pastel knitwear matches his own). Besides the boat-car (pretty much ubiquitous in this sort of movie from this era) and the spore gun, the only real gadget of note is something called a “pulsometer” which Chance wears and may or may not enable his organization, H.A.R.M., to track him. It’s not really entirely clear exactly what it does.

If there’s one iconic spy moment in Agent for H.A.R.M., it has to be one where Bouchet practices archery in her bikini, because that’s just cool–even if her target is only about ten feet away from her. (And, no, the archery sadly doesn’t pay off, although Chance uses a wire coathanger to strangle a particularly clean-cut henchman, if that counts for anything.) Director Gerd Oswald, however, seems far more interested Barbara’s feet than her bikini assets. Quentin Tarantino has professed a desire to be regarded as “the Russ Meyer of feet,” but I think this guy may have beaten him to it. He’s clearly fixated with people’s feet–male and female... and even mouse! (The latter fixation manifesting itself in a weird code phrase about Minnie Mouse’s allegedly large clompers.)

Agent for H.A.R.M. was apparently conceived as the pilot for a Man From U.N.C.L.E.

ripoff TV series, but didn’t get picked up and was retrofitted as a feature film. We’re definitely not missing out on a cool spy show in this pilot not going to series. Agent for H.A.R.M. was featured on the 9th season of Mystery Science Theater 3000, and unlike Diabolik, this title actually deserves that treatment. I haven’t seen that episode, but I’d like to. In fact, it might be the best way to watch Agent for H.A.R.M. Not that the film is without its occasional pleasures (I've yet to find a spy film of any ilk that isn't), but most of your laughter will be at it and not with it anyway, so you might as well have Mike and the bots for company.
Posted by Tanner at 11:38 AM