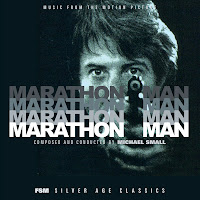 FSM has released the scores for two Seventies spy classics, both by composer Michael Small, on one new CD.  The latest in their line of Silver Age Classics includes over 54 minutes of music from 1976's Marathon Man (including alternate cues) and 24 minutes from The Parallax View (1974).  According to the label's website, "Marathon Man, although produced second, comes first on this CD as it is newly mixed from the original 16-track 2” multitrack tapes for modern stereo sound. No scoring session masters survived for The Parallax View, so its score is presented in mono (given a light stereo reverb for listenability) from the film’s edited music stem."  As can be expected from FSM, the CD includes extensive liner notes (by Scott Bettencourt and Jeff Bond) in the booklet, and even more information on their website. You can listen to samples at Film Sore Monthly or order the CD directly from Screen Archives Entertainment for just $19.95. This release is limited to 3000 units.
Posted by Tanner at 6:44 PM