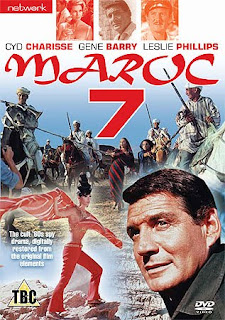 The Gene Barry Eurospy movie Maroc 7 hits Region 2 DVD this week in Britain courtesy of Network, a company that's certainly no stranger to spy fans.  Barry plays secret agent Simon Grant who pursues a chic fashion editor (Cyd Charisse) and her retinue of models and photographers to Morocco, where they're allegedly planning a fashion shoot.  Grant suspects more nefarious motives (international jewel smuggling), and he's right... but before he can pin anything on them, he finds himself framed for murder.  Denholm Elliot and Elsa Martinelli co-star.  In Gene Barry's spy career, this 1966 film came after his American series Amos Burke, Secret Agent but before his British series The Adventurer.  Barry also starred in another Eurospy entry, Subterfuge

, with Joan Collins.  Maroc 7 was previously available on DVD in Germany, and in England as a free promotional disc that came with a newspaper or something like that (copies are still rampant on Ebay), but those were both bare-bones, fullscreen versions.  True to the company's usual standards, Network's edition is digitally restored from its original film elements and presented for the first time in its original widescreen aspect ratio of 2.35:1, which is much more condusive to savoring the film's beautiful North African location photography!  Furthermore, this release also includes the original theatrical trailer, three image galleries (including behind-the-scenes and publicity shots) and a PDF of the film's original publicity booklet.  Retail is £12.99, but the R2 PAL disc can be had at a substantial discount through Network's website and Amazon.co.uk.
Posted by Tanner at 3:33 PM