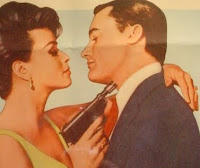 Tradecraft: U.N.C.L.E. Movie Back On Track
It's been years since we've heard any substantial news on the development of a Man From U.N.C.L.E. film, but apparently Warner Bros. has been keeping Channel D open.  According to The Hollywood Reporter's Borys Kit, screenwriter Max Borenstein has just been tapped to pen the latest draft of the long-in-development film adaptation of the classic Sixties spy series.  Borenstein wrote JIMI, a Jimi Hendrix biopic that made last year's prestigious Black List and ended up set up at Legendary Pictures.  The trade reports that David Dobkin is attached to direct, and will also produce along with John Davis (who is involved in another upcoming Sixties spy TV adaptation as well, It Takes A Thief) and Jeff Kleeman.  Kleeman is no stranger to the spy genre, having shepherded the Pierce Brosnan-era Bond movies when he was an executive at MGM in the 90s.  Dobkin may have spent recent years doing strictly comedies of varying quality (Wedding Crashers, Fred Claus), but he also helmed one of my favorite action-comedies of the last decade, the silly and irreverent Shanghai Knights.  Does his involvement signify that we can expect Vince Vaughn and Owen Wilson to play Napoleon Solo and Illya Kurakin?  Eh... I like those guys, but let's hope not!  Personally, I would hope that an U.N.C.L.E. movie would stick to the tone of the show's first two seasons: fairly light, but heavier on the action than the comedy, with any comedy coming from the characters and situations rather than a loony premise.  No dancing gorillas, please!  It's true that Hollywood has a spotty record at best when it comes to reimagining Sixties spy shows as movies, but I remain ever positive each time they try because I love these properties and I want them to remain in the spotlight.

As far as I know, the closest an U.N.C.L.E. movie has ever come to being a reality was when Quentin Tarantino briefly flirted with the concept in the mid-90s, following the success of Pulp Fiction.  Presumably that would have been a radically different take than the one now in the works.
Posted by Tanner at 11:49 AM

Once upon a time I would've cast Owen Wilson as Kuryakin due to his slight resemblence to McCallum way back then. However, after his involvement in I-Spy he disqualified himself, plus the fact that he hasn't done a serious role since that war film he did with Gene Hackman.

Lindsay Dunlap, who apparently owned the rights to the UNCLE film, rallied the fanbase against Matthew Vaughn when he was planning to make his version of UNCLE. Vaughn, who grew up thinking that Robert Vaughn was his father, had just made Layer Cake, and fans thought he was a hack who would reboot the franchise.

Hindsight is 20/20, I guess, but if Dunlap is involved, she sure pulled a fast one on everyone involved.

Oh, yeah; I remember when Vaughn was attached! I wanted that to happen. Had no idea about the Lindsay Dunlap business. (I recall the project falling apart due to budgetary reasons - official line, anyway.) Hm. Too bad. Sounds like we missed out on a good opportunity. Thanks for the info, Armstrong.

Delmo, I actually wouldn't be entirely against Owen Wilson as Illya. You're right; he DOES look the part a bit, and he's shown in the past that he CAN do serious work... but would he? As you suggest, I fear his involvement might spell out a more comedic tone than I would hope the film would take. I'm actually probably the only person out there who LIKES the I-Spy movie. It's an abomination if you look at it expecting a faithfull version of the series, but as a standalone spy comedy, I think it's pretty good - especially Wilson. (Wild Wild West, for example, doesn't even hold up on those grounds.) I just love the enthusiasm he brought to all hir roles back then: "I'm SO thrilled to be a cowboy! I'm SO thrilled to be a spy!" It came across in every line. I also loved the way he kept saying "stakeout."

I thought it was odd that the writers of the new Get Smart decided to put the I-Spy movie and Johnny English into a blender to create their own script. It owed even more to I-Spy than to Johnny English, with The Rock playing the Gary Cole role.

I'm worried that the attachment of Dobkin might signify a Starsky & Hutch sort of send-up approach, but I don't think that's a given. He did a good job with the action in Shanghai Knights as well as the comedy. And I'm encouraged by Kleeman's involvement. It's easy for fans to diss the Brosnan era today looking back, since it ended on such a down note. But Kleeman arguably shepherded 007 through the roughest patch in the character's history with that 1995 reinvention. And GoldenEye was exactly what it needed to be at that time and after a six year absence from the screen. Let's hope he navigates a comparable course for TMFU.