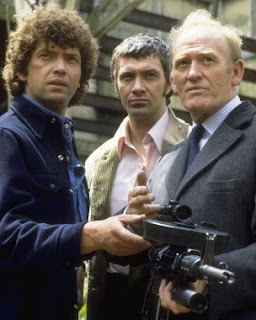 Another Brian Clemens Series Gets A Film Remake

Brian Clemens' New Avengers follow-up series, the cult classic The Professionals, is due for a film remake, according to Empire (via Dark Horizons).  The Professionals were super-agents Bodie and Doyle (Lewis Collins and Martin Shaw), assigned to the elite, extralegal anti-terrorist unit CI5 under the auspices of the grizzled George Cowley (Gordon Jackson). Director Neil Marshall (Centurion, Doomsday) is attached to direct, and he envisions the film as a "British buddy movie." The helmer told Empire, “We want to contemporise it but keep everything that made the original great, just turn it into a real wham-bam rip-roaring adventure movie. And a really great buddy movie: these guys are like Butch and Sundance or Riggs and Murtaugh. But this is a British buddy movie, which I don’t think I’ve seen before...” Even though the film is just in the script stages, let the speculation begin now as to who could fill the shoes of the three leads, or what musician will be tapped to update Laurie Johnson's classic theme music.
Posted by Tanner at 6:05 PM