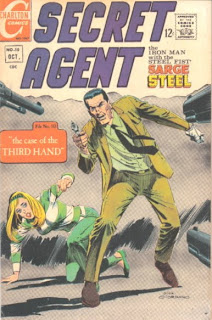 Mister 8, the fantastic COBRAS blog that's been on hiatus for the last several months, is back with a vengeance!  In fact, Armstrong is in the midst of a weeklong celebration of Sarge Steel right now.  Personally, that excites me, because I've always wanted to know more about this steel-fisted comic book spy who started off as a Mike Hammerish gumshoe in Charlton Comics' Sarge Steel: Private Detective and ended up (this being the height of the Bond-led Sixties spy craze) a Bondish secret agent in a comic called... Secret Agent.  While I'm a big fan of Marvel's spy characters, I really don't know much at all about Sarge and King Faraday, their DC counterparts.  And what I do know of Sarge Steel is more from his current DC incarnation (which makes him out to be a rather transparent Nick Fury stand-in for the DC universe), and not from his initial Charlton days, which from Armstrong's introduction sound much more exciting!  So I'm looking forward to learning more about Sarge Steel over the next few days.  Already, Armstrong's posted an informative introduction to the character, an obituary of the recently late, always great Dick Giordano (the initial artist on Sarge Steel whose other spy credits include a Modesty Blaise graphic novel

for DC and the Emma Peel-ized Wonder Woman of the Sixties) and an interview with the artist himself. If you're at all interested in the history of spy comics, be sure to check out these posts.  I know I look forward to learning more about Sarge Steel in the days ahead!
Posted by Tanner at 1:44 PM

Thanks for the link love, sir! I hope the series meets your approval.

No problem, Armstrong! Thanks for the fascinating series. It sure does meet my approval! I've learned a lot.