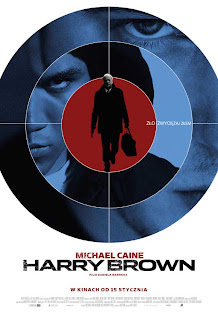 , but the role does represent one of the Sixties’ biggest spy stars in absolutely top form. The easy logline for Harry Brown is that it’s Taken meets Gran Torino, but the Taken comparison (encouraged by the action-packed trailers and badass poster) actually does the film a disservice. It's a bit more Taxi Driver. Yes, Harry Brown ultimately builds toward some shattering scenes of an old guy kicking serious ass, but the film doesn’t take place in the heightened reality of a Luc Besson vehicle. Harry Brown lives in a depressingly recognizable real world, and suffers all the real-world drawbacks of aging. Director Daniel Barber’s film unspools at a deliberate, somewhat languid pace, firmly establishing Harry’s sad, lonely life and all the most unpleasant aspects of aging. Everyone Harry knows is dying off. His wife is in a rapidly-declining catatonic condition in a hospital, and he fears she doesn’t even know when he’s there despite his dutiful daily visits. His only daughter died long ago, and he appears to have no one else. His own health is failing, too, and he must use an inhaler to combat emphysema. Making matters even worse, the housing project where he lives is thoroughly unsafe. The tenement is controlled by a gang of savage kids in hoodies who spend their days dealing drugs and engaging in random acts of violence for thrills, such as shooting pregnant women. At night they occupy the underpass that stands between Harry and the hospital his wife is at, delaying him in seeing her for his fear of walking through. The police seem utterly ineffectual at maintaining order in the slum, although not for lack of trying on the part of the wonderful Emily Mortimer’s Detective Inspector Alice Frampton, who's frustrated by all the dead ends thrown up against her, but uncompromising in her adherence to the letter of the law. 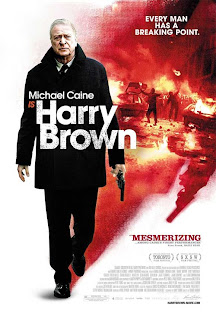 The first half of Harry Brown is a pure character study, examining a man alone whose best years (including a medal-studded stint in the Royal Marines which he’d much rather forget) are far behind him, and meticulously developing his oppressive environment. Then something happens that causes him to snap, and Harry’s old marine training (and, crucially, his long-suppressed ability to kill) kicks back in. Harry doesn’t become a vigilante in a single instant, but that one event does put him on a completely credible path that ultimately leads to the bloodbath the trailers would have you believe the entire movie is. Even when performing feats of cheer-inducing action, Harry’s age is still catching up with him. It is cool to watch an old guy kick ass (especially when the old guy in question has such an illustrious history of kicking such ass), but those feats are all more realistic than the ones performed by Harrison Ford in the last Indiana Jones movie or Sean Connery in The Rock. In the midst of a frantic foot chase, Harry’s emphysema catches up with him and he collapses, clawing at the ground. And when the tables are turned on Harry, he’s frankly not capable of putting up too much of a fight. But when he’s in control, he is very much in control, and capable of the same sorts of uncompromising acts of righteous violence as Taken’s Brian Mills or 24's Jack Bauer. 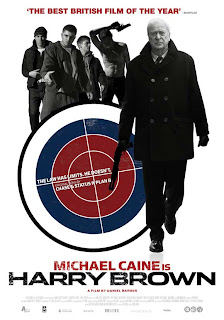 Harry Brown is an at times depressing but ultimately entirely satisfying vigilante drama. An interesting character study, buoyed by a superb performance from Michael Caine, builds to a well-orchestrated bloodbath sure to invoke audiences’ own latent bloodlust, and then give viewers something to think about when they catch themselves cheering at the carnage. It does reference some of Caine’s past work (particularly Get Carter), but never becomes bogged down in any sort of self-referential winking. It’s a film that stands on its own and a great role for Caine at this point in his career. Fans of the actor shouldn’t miss it.

Harry Brown opens theatrically in the United States on April 30. It opened last year in Britain, where it is already available on Region 2 DVD