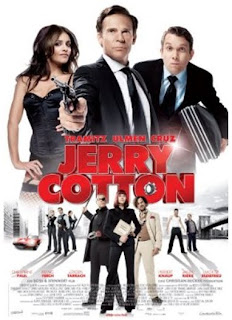 The new Jerry Cotton movie (a comedic update of the classic Sixties George Nader Eurospy series), which opened in Germany last month, is already available for pre-order from Amazon.de on DVD, Blu-ray and Special Edition Blu-ray.  It will be available on October 31. Unfortunately, it's impossible to say from these listings if there will be any English subtitles, but sadly I would doubt it.  Still, you can at least watch another trailer on any of those Amazon listings, and though it's in German, you get a pretty good idea of the film.  (And watch for Casino Royale's comic relief scene-stealer Jürgen Tarrach!) It seems to play things a bit straighter than either the previous director/star pairing, the Edgar Wallace send-up Die Wixxer, or the French Eurospy revival parodies featuring OSS 117.  Jerry Cotton looks to be a fairly straightforward action/comedy rather than a spoof; the comedy seems to be generated by the characters (some rather silly) rather than the premise.  I really hope that the rest of the world has a chance to see this eventually, because I'm very curious to see how Jerry's been updated for the 21st Century.