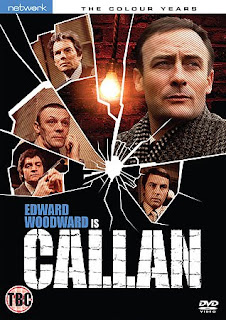 Following on their world-premiere release of the surviving episodes of Callan's first two black and white seasons, UK company Network has now announced the series' complete color (sorry, colour) episodes, comprising the entirety of Seasons 3 and 4. Callan: The Colour Years, a six-disc set, will be released on May 10 and retail for £79.99 (although it can currently be preordered from Network at the discounted price of £51.99 and for slightly more at Amazon.co.uk).  The first color season was once available in Britain from a different company, but has been out of print for some time.  In the interem, these seasons have seen release from Umbrella in Australia and, more recently, from Acorn

in the United States.  Now Callan's native country finally catches up with the rest of the world!  The UK also will also have the distinction of being the only place in the world where you can buy every existing episode of the series.  (The remaining episodes from the first two seasons have yet to be released in America or Australia.) Unfortunately, Network's release is atypically bereft of bonus features.  It lacks the commentary tracks and Woodward interview from the Acorn and Umbrella releases, and, like those ones, omits the 1974 Callan feature film and the TV reunion movie Wet Job due to rights issues.  (The movie is available in England, though, on its own.)

I've said it many times before, but I'll say it again: Callan is an exceptional show, and absolutely essential spy television–especially for fans of the grittier side of the genre.  Edward Woodward has a commanding presence in the title role of an unglamorous government assassin, Russell Hunter returns as his shady underworld contact Lonely, and Patrick Mower and William Squire bring vital new blood to the show's color years as Callan's boss and colleague, respectively.  Anthony Valentine, who made such a lasting impression in the black and white seasons as the psychotic Toby Meres, returns for the final season as well.  Callan is a show that never faded, and these two color seasons are every bit as good as their monochrome predecessors.

My review discs of this set arrived this week and I'll be digging into them over the next week or two.

The monochrome years set was superb, can't wait to watch more. I'm only sorry there are just 22 episodes to go...