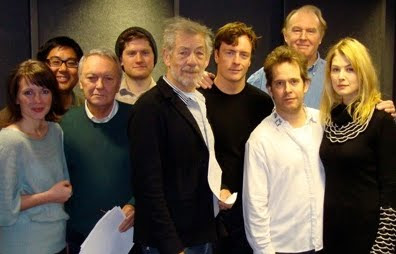 BBC's Goldfinger Radio Adaptation Available To Listen To Until Tomorrow

I apologize for failing to report this until the last minute, but the previously announced Radio 4 adaptation of Ian Fleming's novel Goldfinger starring Toby Stephens as James Bond, Ian McKellen as Auric Goldfinger and Rosamund Pike as Pussy Galore is available to listen to on the BBC's iPlayer until 8AM Pacific Time tomorrow (Saturday).  This dramatisation was part of their "Saturday Play" series. Former Saint Ian Ogilvy plays gold expert Col. Smithers, Quantum of Solace's Tim Pigott-Smith turns up as Mr. Solo and Young Indiana Jones's TV dad, Lloyd Owen plays Felix Leiter.  It's a pretty good adaptation, and a definite improvement over the previous "Dr. No" radioplay, although as a relatively faithfull version of Fleming's novel, it obviously can't help but suffer from some of the novel's shortcomings. And Pike's American accent is a tad dodgy–and a bit more Midwest than South–but the Die Another Day Bond Girl's performance is still otherwise good.
Posted by Tanner at 1:38 PM

Tom "The F^*%er" Hollander played Kim Philby in the TNT version of Littell's The Company, and Guy Burgess in Cambridge Spies. Who does he play in Goldfinger?

I believe Hollander played one of the gangsters, but I'm not positive.