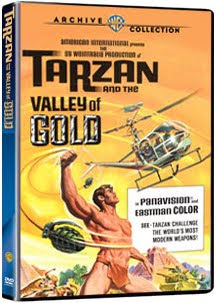 New Spy DVDs Out This Week: Our Man In The Jungle

Warner Archive has made the last of the unreleased Tarzan movies available on DVD this week, including the Jock Mahony and Mike Henry entries in the long-running jungle adventure series based on Edgar Rice Burroughs' novels.  What does this have to do with secret agents, you ask?  Long-time readers and Tarzan aficionados will no doubt be aware that the Mike Henry era coincided with that mid-Sixties explosion of Bondmania, when spies permeated all walks of popular culture from movies to TV to cartoons to comic books.  Established pop culture icons of the past and present (Amos Burke, The Shadow, Sgt. Fury, even Fred Flintstone) were reinvented as Bondian secret agents–and the Lord of the Jungle was not exempt from the trend.  Mike Henry (who made a good leading man and a completely credible Tarzan) made his debut as Tarzan not in a loincloth, but in a sharp brown suit, descending the steps of a jetliner at a foreign airport like so many other TV and movie spies.  The year was 1965, and the movie was Tarzan and the Valley of Gold (marketed in some spy-crazy but less Tarzan-savvy territories as Our Man in the Jungle).  Sure, Henry eventually ends up in his regular jungle duds, but not before contending with an assassin in an empty arena in a very cool sequence that could be lifted directly from any number of Eurospy movies.  Read my full review of Tarzan and the Valley of Gold and see pictures of Tarzan in his suit here, and then rejoice that you can now own the movie in a crisp widescreen transfer with awesome cover art (I'm so glad they changed the Archive covers!) courtesy of Warner Archive.  Henry's subsequent entries, Tarzan and the Great River and Tarzan and the Jungle Boy retained some of the spy elements, but not many.  Each movie retails for $19.95, but they're all on sale now for $14.96 a pop.  Or you can get all five titles for $49.95.  All Warner Archive titles are made-to-order on DVD-R.
Posted by Tanner at 6:30 PM

I REALLY want to get these but $50 for 5 films isn't that great a deal considering that, if this were a wide release set, it would probably be 5 films for $30 or so.

Tarzan as a spy? That's a hilarious image. I gues he's a... Swinger?

I must see this!

Awesome! Been waiting for "Valley of Gold" for ages. Thanks for the heads-up. :-)