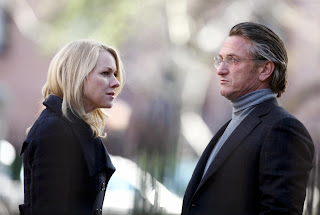 Variety reports that Summit Entertainment, the fledgling studio best known for the Twilight saga (and a number of Pierce Brosnan movies), has picked up the North American distribution rights for Bourne Identity director Doug Liman's latest spy movie Fair Game, about outed CIA agent Valerie Plame. Naomi Watts stars as Plame, and Sean Penn plays her husband. Plame's is a real-life story of the messy intersection between spies and politics that could easily have come from the mind of John Le Carré... and I find it fascinating.  In 2003, the undercover agent's identity was leaked to the media and made public–putting her in jeopardy–by shadowy figures in her own government to forward their own political agenda after her husband, former ambassador Joseph Wilson, publicly criticized the administration's justification for war in Iraq.  The issue was instantly politicized, but to me the most interesting aspect of it is not the political ramifications at all, but the inherent espionage drama.  I mean, this is exactly the story that spy fans have read in fictional form again and again from Le Carré to Queen & Country

: an active agent risking her life for her country betrayed and hung out to dry by unscrupulous politicians. And Liman seems like the right man to tell it, having kickstarted the cinematic adventures of another agent foresaken by those he served, Jason Bourne.  Unsurprisingly, Summit's co-chairs described their new acquisition as "a very strong, engaging thriller that will keep audiences on the edge of their seats." According to the trade, "Fair Game is based on Plame's memoir of the same name [not the 1995 Cindy Crawford movie], and also draws from Wilson's book The Politics of Truth."  Brothers Jez and John Butterworth wrote the script.

When it was first announced, Liman's movie was set up at Warner Bros., but the studio got cold feet after other serious, adult dramas (like State of Play and Duplicity) flopped at the box office. Summit might be just the right company to buck that trend, though, having already successfully marketed serious dramas like Best Picture winner The Hurt Locker and The Ghost Writer.  They'll get a free head-start on their marketing campaign, as Fair Game is the only American movie in competition at this year's Cannes Film Festival.
Posted by Tanner at 11:21 AM