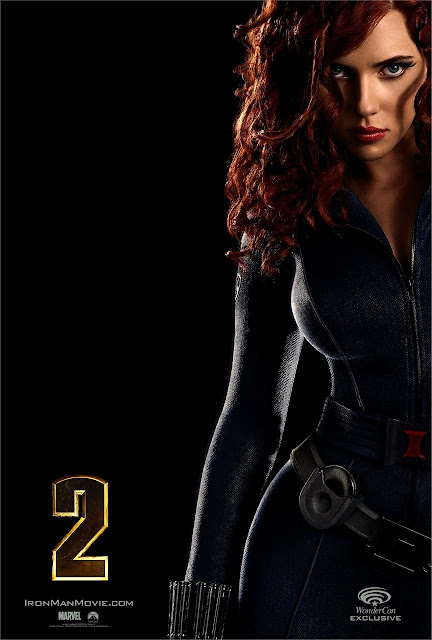 Well, this certainly makes up for that mediocre Iron Man 2 theatrical poster I linked to the other day!  Superhero Hype offers a first look at the new Black Widow character poster that will be offered as a WonderCon exclusive this weekend in San Francisco.  It showcases Scarlett Johansson's ability to fill out the sexy comic book spy's trademark catsuit.  (Shades of Emma Peel!)  This should be up in theaters advertising the movie. 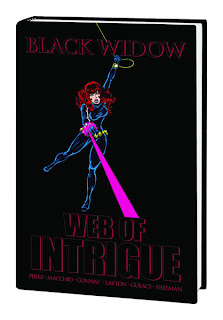 A new official Iron Man 2 website has also just opened up, and it offers a gallery with better looks at S.H.I.E.L.D. superspies Black Widow and Nick Fury in action (as well as wallpapers), including the one below.  Marvel is also taking advantage of Black Widow's higher profile and finally offering an excellent primer on the character containing some of her classic appearances from the early Eighties, including an excellent comic drawn by my second-favorite spy artist (after Steranko), Paul Gulacy.  (Look for a cameo appearance by Michael Caine!)  Black Widow: Web of Intrigue

and Black Widow and the Marvel Girls

.  Alas, there is still no Essential Black Widow, which I would dearly love to see one day (pretty much all of her essential solo adventures could be collected in a single volume in this format), although most of the character's adventures with Daredevil are included in Essential Daredevil: Volume 3

GREAT POSTER! I AM SO THERE!