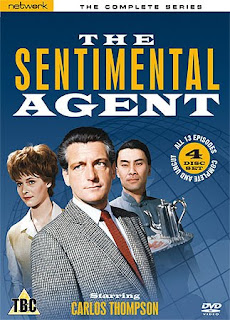 Here's one I've been waiting for!  Ever since Network released Man of the World as a web exclusive, I've been hoping the UK company would follow it up with a DVD release of that show's spinoff, The Sentimental Agent (1962).  And on May 17, they will! Surprisingly (for the Sixties, anyway), the titular agent (Carlos Varela, played by Carlos Thompson) is not, in fact, a spy, but an import/export agent.  Go figure!  This being an ITC series, however, he's an import/export agent who frequently finds himself embroiled in espionage nonetheless.  One of the primary ITC templates of the time was to follow a man with an ordinary yet glamorous profession (such as Man of the World's photojournalist, or The Baron's antiques dealer) and plunge him into dangerous exploits in exotic locales week after week. Varela's importing and exporting gets him mixed up with spies trying to cross borders, spies stealing spaceflight secrets and spies posing as jazz musicians, as well as all manner of assassins, international criminals and generally disreputable miscreants. Varela is occasionally assisted in his risky business by secretary Suzy Carter (Clemence Bettany), associate Bill Randle (John Turner) and manservant Chin (Burt Kwouk, of Goldfinger, the Pink Panther series and, oh, every Sixties British TV series that ever required an actual Asian guest star). Guest stars who cross Varela's path include such spy alum as Jeremy Bulloch, Vladek Sheybal, Zena Marshall, Patrick Newell, Dennis Price, Donald Sutherland, Imogen Hassall, Charles Lloyd-Pack, Annette Andre, Walter Gotell and a young Diana Rigg, in her screen–and spy–debut. It was also her first time speaking lines written by Brian Clemens, one of the primary creative forces behind the Rigg era of The Avengers. Rigg's episode, "A Very Desirable Plot," also features Kwouk and Sutherland. Besides Clemens, other notable spy writers contributing to The Sentimental Agent include Tudor Gates and Julian Bond.

Network's PAL Region 2 DVD set includes all 13 black and white episodes, but sadly not the ultra-rare feature film Our Man in the Caribbean, which was made by editing together "A Very Desirable Plot" and one or two other episodes, possibly including the Man of the World episode "The Sentimental Agent," which originated the character and featured Shirley Eaton.  (That de facto pilot isn't included here, either, though it is, of course, available on Network's Man of the World release.) It does, however, boast several notable extras: “With This Face,” a brand new interview Burt Kwouk, episode stills galleries and PDFs of original promotional material. The set runs £39.99, but is available to preorder at a discount from Network. There's no Amazon.co.uk listing yet, but this doesn't appear to be a Network web exclusive like Man of the World, as far as I can tell.
Posted by Tanner at 4:21 PM