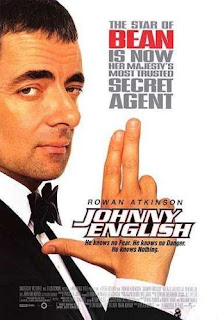 Tradecraft: Johnny English Back In Action!

Hm!  This is unexpected.  Seems more like a headline we would have read a week ago, on April 1, but it's real.  And I, for one, couldn't be more pleased!  According to Variety, Universal Pictures is gearing up for a sequel to Johnny English

.  That's right, a sequel, seven years later, to the 2003 Rowan Atkinson spy comedy that only grossed $28 million in America.  Sound odd?  Actually, the studio sees it as a safe bet.  You see, even though it didn't make much of an impact on the U.S. box office, Johnny English actually raked in $161 million worldwide on a $40 million budget.  The trade reports that after suffering "a string of disappointments with recent adult-skewing serious pics like Public Enemies, State of Play and Green Zone ... speculation has been mounting for months that the studio is moving away from weightier projects and has begun to aim for the box-office funnybone."  This move toward mid-budget comedies unfortunately comes at the expense of more serious action movies like Cartel (which was at one time set to star Clive Owen but more recently Josh Brolin), which the studio just scrapped five weeks before filming was to begin.  It's too bad, because as I said in my review, Green Zone was an excellent, excellent film.  It's a shame there seems to be no audience left for serious, adult thrillers.  But I'm still excited at the prospect of more Johnny English!

I know I'm in the minority, but I actually loved the first movie.  I liked it more than any of the Austin Powers flicks

, and I regard it as one of the best spy parodies out there.  (Clearly so did the writers of the Get Smart movie

, since their movie was largely a remake of Johnny English!) It's what the recent attempts at reviving the Pink Panther franchise should have been; or rather, why they shouldn't have been necessary.  Rather than trying to reinvent another actor's character who shouldn't be reinvented, Atkinson created his own bumbler who operated with supreme confidence in a world where everyone else could see he was an idiot, but who still came out on top.  That's the Pink Panther formula, and executed quite well.  The first film also boasted a legitimately superb spy score

) is set to direct the sequel, working from a script by Hamish McColl (Mr. Bean's Holiday).  It's a pity Bond screenwriters Purvis and Wade aren't involved again; they proved particularly adept at sending up their meal ticket. (I greatly preferred their Johnny English script to their Die Another Day script!) I really hope Ben Miller is in the sequel, because the relationship between Atkinson and him (as Johnny's more competent sidekick, Bough) was the best part of the film.
Posted by Tanner at 11:16 PM

Well, like I said in my own blog last year, when I watched JOHNNY ENGLISH the second time, I liked it much better.

Still not quite as fond of it as you are, although I do agree with you that the score is excellent.

I'm not the biggest Atkinson fan - as I've admitted before - but if this actually comes to pass, I'll certainly give it a chance.

I too enjoyed Johnny English as lightweight entertainment. And while I won't exactly be waiting with high expectation, I'll be in the audience when it comes out.

Glad to see there are other fans.

Christopher, what Atkinson stuff have you seen? Stuff like Bean certainly isn't for everyone. But I highly recommend Black Adder. Don't start with Season 1, though; try 3 or 4. Knowing your tastes, I'd particularly recommend 4. It benefits from the presence of both Stephen Fry AND Hugh Laurie as regulars, and it has a very unusual setting for a sitcom: the trenches of WWI. Plus, it's got a hell of a finale. I think I first saw Atkinson as Nigel Smallfawcett. I know I'm in the minority liking that character, but as a kid he sure amused me ducking behind those columns!