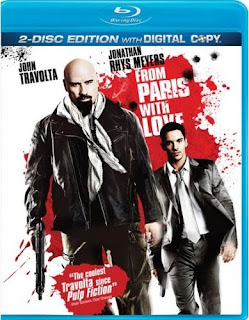 DVD Active reports that Pierre Morel's latest neo-Eurospy movie, From Paris With Love, will be out on DVD

from Lionsgate on June 8.  And it boasts plenty of extras tailor-made for spy fans! Besides a commentary with Morel (whose previous neo-Eurospy effort was Taken) and a making-of featurettes ("The Making-of From Paris With Love"), we also get the intriguing "Spooks, Spies and Special Ops: Life Under Cover" and "Secrets of Spy Craft: Inside the International Spy Museum." Those both sound pretty cool! A look at "Charlie Wax's Gun Locker," the theatrical trailer and a trivia game called "Friend or Foe" (Huh? From Paris With Love trivia?  Really?) round out the special features. Oh, and the Blu-ray release will also include that idiotic but ubiquitous digital copy of the film. Wouldn't it have been awesome if they had used the supercool Eiffel Tower/gun teaser image for the cover art instead of Travolta's and Rhys-Meyers' goateed mugs? Sigh. A missed opportunity.

I never got around to posting a review of From Paris With Love, but I enjoyed it... almost in spite of myself.  It's not as good as Taken or the Transporter movies (previous neo-Eurospy efforts from producer Luc Besson), but it ended up being pretty fun anyway.  From the trailers, I thought I was going to hate Travolta and his Charlie Wax persona, and for the first twenty minutes I did.  But then suddenly I went from cringing at his bad one-liners and miles-over-the-top delivery to laughing at them.  And in the end, he kind of made the movie rather than ruining it!
Posted by Tanner at 5:27 PM