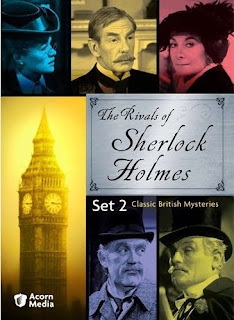 ...and last, since I didn't get around to doing this post then.  Last week saw the release of The Rivals of Sherlock Holmes: Set 2

from Acorn Media.  Set 2 features more fantastic adaptations of detective stories by contemporaries of Arthur Conan Doyle, but whereas the first set contained only one or two spy stories, a full half of the episodes in this collection qualify as espionage, including the only modern adaptations of the work of genre pioneers William Le Queux and E. Phillips Oppenheim.  The Oppenheim story, "The Secret of rhe Magnifique," is probably the best of the set, but you can't really go wrong with any of them.  This collection draws extensively from Hugh Greene's volume The Foreign Rivals of Sherlock Holmes

, so the settings are a bit more far-flung than merely London this time around, with adventures taking place as far afield as Coppenhagen and South Africa.  On the non-spy front, there's also a teriffic version of Jacques Futrelle's "The Problem of Cell 13."  I'll have a full review up shortly, but if you like Victorian and Edwardian adventures, you can't go wrong with this.  I'm so thankful that such a wonderful show that was completely lost to us just a few years ago is now available in its entirety on DVD! 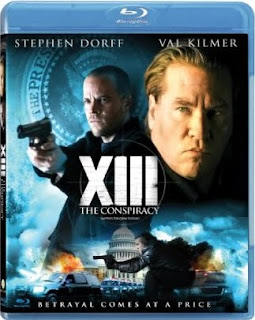 This week, XIII: The Conspiracy hits stores on DVD

of the same name by Jean Van Hamme. Three months after the assassination of an American President, a wounded man is found hanging from a tree with no memory. The only clue to his identity is a tattoo on his neck.  You guessed it: XIII. Note that the Blu-ray

version of XIII is uncut and runs 180 minutes, while the DVD

contains an edited version that only runs 136 minutes.
Posted by Tanner at 12:59 AM