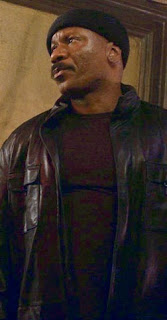 Movieweb (via Dark Horizons) reports that Ving Rhames appeared on Lopez Tonight last week and told the talk show host that he'll be reprising his role of Luther Strickell in Mission: Impossible 4. That's the second team member confirmed to be joining Tom Cruise's Ethan Hunt for this mission, after earlier word that Simon Pegg will again play Q-like gadget techie/computer nerd Benji Dunn in director Brad Bird's new entry in the ongoing film franchise. I hope we get more team casting news in the coming weeks, as Mission: Impossible should be an ensemble franchise, like the fantastic TV show from which it takes its title and theme music.  Sadly, Maggie Q will probably be too preoccupied with her new spy series to return. I could be wrong (I don't watch these films very often), but I think Luther is the only character besides Ethan Hunt to appear in every movie to date.
Posted by Tanner at 11:50 PM