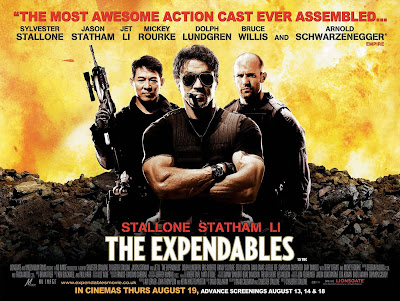 Despite a few standout titles like The Wild Geese (starring Roger Moore), I’ve never been a big fan of the mercenary genre. For better or for worse, it’s one that frequently intersects with the spy genre, from TV shows like Saracen that straddle the line to my least favorite episode of Return of the Saint (which tries to cast Simon against type as an out-and-out soldier of fortune) to movies like The Wild Geese and Sylvester Stallone’s new action all-star jam, The Expendables. The Expendables is not a perfect movie (though it’s plenty entertaining!), but it definitely ranks among the better mercenary pictures, in my opinion.

Bruce Willis cameos as an Agency spook who tasks Stallone’s titular soldiers of fortune with overthrowing the government of a small island nation in South America. The island is ruled by a military dictator named General Garza, but the real threat is the guy pulling his strings: rogue agent James Munroe (Eric Roberts) who could prove an embarrassment to the CIA, hence farming out the assignment to mercenaries rather than using American forces. Munroe bankrolls Garza’s junta in exchange for massive quantities of cocaine he can sell back in the States. If that plot sounds right out of the Eighties, well, that’s the point. 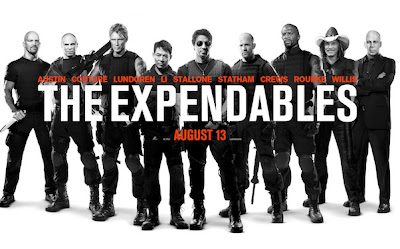 The whole movie is a throwback to the sort of Eighties action movies Stallone and his co-stars used to make, like the second two Rambo movies, Cobra and Commando. It takes place today, but other than a brief (and underwhelming) opening featuring Somali pirates, the CIA/cocaine threat is torn from Eighties headlines. There is nary a mention of Iraq, Iran or the War on Terror. Just as American and British Cold War audiences took comfort in reliving WWII victories on screen throughout the Fifties and Sixties, I think contemporary audiences find solace today in the threats of the Eighties: the Cold War itself (as seen on the final season of 24 and in Salt–as well in newspaper headlines this summer) and islands full of drugs led by evil juntas. These are threats that we’ve conquered (to some degree, anyway; I’m not saying there isn’t still a huge drug problem!) and which seem manageable compared to rogue nuclear states and terrorists hiding in caves. Movies that try to take on realistic contemporary threats head-on, like Green Zone or Syriana, tend to falter at the box office. It’s much easier to embrace nostalgic threats.

The nostalgia in The Expendables is not limited to the bad guys, however. The whole movie is an unabashed throwback, both in its cast and its direction. Eighties and early Nineties icons like Stallone, Dolph Lundgrun (who many forget began his career as a Bond baddie in A View to a Kill) and even Arnold Schwarzenegger (who pops up extremely briefly in the same scene as Willis, which was my favorite scene in the movie) mingle with the most old-school action stars of today, like the great Jason Statham, whose Transporter series is one of the last vestiges of the pre-Bourne action movie. The Expendables itself is defiantly pre-Bourne (or anti-Bourne?) in its approach; Stallone directs action the old way, without an abundance of confusing quick cuts or an over-reliance on obvious CGI. In one of the coolest touches, the general’s army all paint their faces like Aladdin Sane, with yellow bolts cutting across black greasepaint. This not only makes them easy to differentiate from the heroes in the battle scenes (which is kind of necessary since there are so many heroes packed into this flick), but also successfully dehumanizes them, turning them into something more akin to robots or monsters than men, and making the ridiculously high body count easier to accept. Yes, there’s an Eighties level of violence, with death tolls reaching and probably exceeding Commando levels. There’s also a certain exuberance to the violence only found in the films of that era–especially Commando, Cobra and Rambo III. Obviously a film that so gleefully celebrates violence isn’t for all tastes, but if you check any PC inhibitions at the door and let yourself be transported back to a past era of action movie, you’ll probably enjoy it.
Posted by Tanner at 12:46 PM