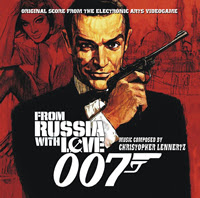 Buysoundtrax is offering another exclusive James Bond score CD as a premium when you spend $100 or more.  Once again, I'm really bummed that that's the only way to get this CD, but it is.  And I never happen to have $100 extra cash lying around.  But if you do, spend it at the soundtrack site and you'll get composer Christopher Lennertz's score for the 007 Electronic Arts video game From Russia With Love for free!  (Er, free plus $100, that is.)  This is a factory-pressed promotional CD, not available in stores.  And it's got such cool cover artwork!  You can sample tracks at BSX or on the composer's website (which also offers some cues from his Quantum of Solace game score).  I really wish they'd officially release these Bond video game soundtracks.  I certainly hope they do when David Arnold scores the new GoldenEye game this fall.  I'd love to be able to add an Arnold GoldenEye soundtrack to the Pierce Brosnan section of my Bond CD shelf (even if the new version of the game weirdly stars Daniel Craig in his stead).
Posted by Tanner at 9:36 AM