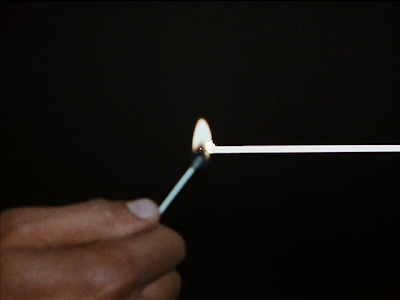 Last week it was John Le Carre; this week it's Mission: Impossible that just won't stop generating headlines.  Yesterday we learned from Deadline that Jeremy Renner will play another agent alongside the returning Tom Cruise, with a view to a possible torch passing in subsequent installments.  Today, Variety has a story that suggests that this outing will be much more of a reboot than previously suspected.  In fact, it won't even be called Mission: Impossible 4.  Weirdly, it might not even be called "Mission: Impossible" anything!  According to the trade, "insiders" disclosed that "it's possible that the title won't even include any variation on the familiar moniker (much as Christopher Nolan's Batman sequel was simply titled 'The Dark Knight')." To which I say... huh?

As I've stated many times on this blog, the film series has basically ignored the premise of the superior TV show on which it's based, going so far as to make the show's hero, Jim Phelps, a traitor in the first film and then kill him off.  That left them with more of an imitation James Bond series (not that we have anything against Bond imitators around here, mind you!), focusing mainly on a single maverick secret agent played by Tom Cruise with occasional support from others.  Fine.  So that means that the studio was paying royalties to someone for what basically amounted to a title and a musical theme.  Again, nothing wrong with that.  It's a great title, and possibly the most recognizable theme music in the world.  But to lose the title part, after long ago abandoning any vestige of the TV series... well, then they're just paying for the theme!  Which is honestly kind of weird.  And what are they planning to call it, anyway?  Batman has long been known as "The Dark Knight" in other media, so that title made perfect sense.  What else is Mission: Impossible known by?  "Lit Fuse?" I suppose Tom Cruise's character's name, Ethan Hunt, is pretty recognizable by now, but when the whole point of this reboot is to phase out Cruise in favor of Renny, that means you can't call the new sequel "Ethan Hunt!"  (The only title I can think of that would really fit these cryptic clues would be Mission Accomplished, which isn't bad but sounds very final.)

Many times I've suggested here that the simple solution to Paramount's dilemma would be to return the franchise to its roots; to go back to a team concept rather than a single lead.  Then they're not so dependent on any one star's box office draw. But the Variety story makes it clear that they're not going in that direction.  In fact, they seem to be going in the exact opposite direction!  And lest fans of the TV series think that it wouldn't be possible to get any further away from it, well, Variety seems to feel that they've hewn closely so far: "In the first three installments, Ethan Hunt (Cruise) worked with a team of agents, reprising the premise of the '60s TV series.  In [director Brad] Bird's film, there will be only two agents, played by Cruise and Renner, who will have a role as big as Cruise's.  While Paramount envisions Cruise returning for subsequent films, Renner could play the central character in future installments."  Again: huh? Will they be seguing Cruise into more of an M role?

While this "only two agents" business doesn't seem to jibe with Deadline's story today that casting was underway for someone to play a young female agent, it's kind of alarming that the project seems to have undergone such a radical shift since Cruise's Knight and Day flopped at the box office.  (And it wasn't even as huge a flop as everyone seems to want it to be; the film has earned $222 million to date, which is hardly a blockbuster, but also nothing to sneeze at.) But when Alias writers (and frequent J.J. Abrams collaborators) Andre Nemec and Josh Applebaum first turned in their script, there was no report about its being a radical reinvention of the franchise.  In fact, Paramount seemed quite pleased when it was able to lure Cruise back after such a messy public split following the release of M:I-III.  So has the script been radically re-worked to introduce another agent with a role as big as Cruise's in just the last few months?  With shooting set to begin soon?  And if so, is that a good thing?  As a fan of the brand, I really hope so.  I just don't understand what we're hearing.

The trade also reveals that "the story brings a fresh perspective to the action-spy franchise and does not pick up where the last film left off."  That also seems a little weird, considering J.J. Abrams really steered that one in the right direction, and since he's producing this one, I would have expected it to continue in that direction.  (Plus, Ethan Hunt was left with a wife or a fiance or something.  Hopefully they'll explain why if she's not in the new film.)  I just can't help but wondering if the Knight and Day situation sent people into panic mode desperate to fix something that wasn't all that broken.  Or at least wasn't broken in the way they thought it was.

Okay, rant over.  Now I'm going to go do what everyone at Paramount should do: fire up the DVD player and watch some good old Peter Graves Missions...
Posted by Tanner at 9:51 PM

Darn! I thought you were finally getting down to reviewing the TV show's seventh season... :(

Elliot James said...
This comment has been removed by the author.
11:05 PM

You're right, K&D basically doubled its production budget in revenues at the worldwide theatrical level even though it was called a flop in the US. Movies are just too expensive. Even the Expendables was 80 million. I've never gone to see the MI films in a theater, didn't see #2 at all and wasn't impressed by 1&3 although some of the set pieces (the train/copter scene in #1) were top notch. (Watching the TV show on DVD is far more enjoyable.)

Sorry, CK, not yet... but I'll get to that sooner or later! (Without another season looming for release, I haven't felt quite the deadline push. In fact, I'm enjoying savoring the final season a bit.) So would Barney's finest moments be the ones with a mustache or the ones without? I'm busy enough just keeping track of his facial hair!

But what do you think about the film franchise, CK, and what looks like a possible move even further way from the series you clearly love, if that's even possible??

Elliott, I sure agree that watching the show is far more enjoyable than any of the films. I've never reviewed the films here, but I will sometime before the fourth one comes out. My basic view now, though, is that the first one's OK (more in a second), the second is atrocious, and the third is the best of the bunch. I haven't loved any of them, but I always hold out hope! I was very excited for the first one when it came out, and then HATED it because of what it did to Phelps (who I knew at that point from the Eighties incarnation of the show). It took me years and years to finally give it another chance. I do like that the first twenty minutes or so is the most like an episode of the series we ever get in the movies, but that twist is still detrimental. The direction is solid though. The one thing I did love about it at the time was the Clayton and Mullen version of the theme song, the cassingle of which I played endlessly on my car stereo in high school (especially when "stealthily" "decorating" the school before graduation). That hasn't aged so well though.

Your on to something, Tanner. The second "Mission Impossible" became a superstar vehicle for Tom Cruise the whole concept of the tv series- an elite of bloodless professionals who defy the odds- vanished! In many ways the "Ocean's 11" movies are closer in spirit by allowing an ensemble of stars to share in the story's complex adventure (the movie's casino robbery is a sort of "mission").

Also the Ethan Hunt films have had the strangest trajectory of any movie series. 1 and 2 are flawed. 3 is the best. 3 flops. How odd.

I agree completely with your take on the M:I franchise, an agreeable vanity project for Cruise, but one that totally misses the chance to recreate the genius of the original series. There are teasing traces of this in the third film, where there's a cool little team, but one that essentially just pulls of heists and not long cons.

And, btw this site? Best Blog. Ever.