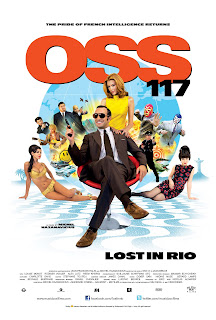 Today, Americans are finally able to buy the fantastic spy parody sequel OSS 117: Lost in Rio on DVD!  This hilarious follow-up to OSS 117: Cairo Nest of Spies (which I picked as the best theatrical spy release of 2008) is as loving and meticulous an homage to and send-up of Sixties Bond films, the Eurospy genre and of course the original OSS 117 movies (which played it straight) as you could hope for.  Read my review of the film here, and read my introduction to the character here if you're unfamiliar with OSS 117's current or past incarnations.  Suffice it to say, this film is a must-have for spy fans.  Director Michel Hazanavicius not only sets the film in 1967, but also shoots it as if it were made then, with rear projection and stock footage and appropriate lighting and film stock.  It looks great.  Sadly Music Box Films are not releasing this on Blu-ray, even though there was a Region 2 BD release in France, but happily they have included a subtitled version of the 24-minute Making-Of documentary from the French release!  This includes interviews and behind-the-scenes footage.

The movie is still going strong in theaters, though, continuing its summer-long platform release.  It opens in Cleveland, OH on September 3 and screens in the Milwaukee Film Festival in Wisconsin the week of September 23.

Also debuting today on Region 1 DVD and Blu-ray from Sony is the Michael Caine revenge vehicle Harry Brown.  Harry Brown isn't a spy movie, but any movie in which Michael Caine kicks so much ass at any age should definitedly be on the radar of a lot of spy fans.  That said, please bear in mind that you are not going into a fun, Taken-style old guy revenge movie.  Harry Brown is a gritty and, frankly, depressing character study that bursts into realistic and disturbing mayhem in its second half.  It is very good and Caine deserves an Oscar nod, but it isn't fun.  You can read my full review here.

There are also a few notable releases on the other side of the pond today.  UK spy fans finally get a good version of The Protectors: The Complete Series, courtesy (as usual) of Network.  This colorful half-hour ITC series from Gerry Anderson features former Man From U.N.C.L.E. Robert Vaughn as international private detective Harry Rule.  The plots are fluff, but the action is legitimately international, with lots of location filming, and the music is awesome.  The Protectors is a lot of fun.  Also out in the UK is Mark Gatiss' and Steven Moffat's updating of Sherlock Holmes to the present day, Sherlock.  I haven't seen this yet, but I'm dying to.  (Regular readers will be aware of how much I like Gatiss, who penned the terrific Lucifer Box novels.)  The Region 2 DVD and Blu-ray include commentaries from Gatiss, Moffat and the cast as well as the unaired hour-long pilot episode.  Sherlock is due out on DVD and Blu-ray in the United States with the same special features this November, following a telivision run on PBS.
Posted by Tanner at 4:52 PM

Regarding The Protectors DVD release, it isn't really accurate or fair to say that "UK viewers finally get a good release of it"

The previous UK release was a the Carlton Video set. The Network set uses the same prints. There is no improvement in picture quality. The Network set has a few more extras (more photo galleries and some not very stunning .pdf material) but it does not included even one commentary or interview excerpt - or even a booklet - as the Network release of THE ADVENTURER (arguably a poorer series) did. Look at some UK forums and you will see that most fans question the point of buying the Network set for what 'extra' material is on it.

The Australian 'Umbrella' release of the series is also easily available online. Again, it uses the same prints. It has the generally same extras as the Network set, and does have some interest in that a commentary was recorded for one episode by Derren Nesbitt. Network couldn't even be bothered to do that. So you can understand how people are somewhat reluctant to shell out £££ for the Network set, can't you?

I really enjoy this blog. But I do see some unfair and often inaccurate comments when it comes to Network products. You might well be committed to giving them a little commercial advantage and if the product warrants it, then fair enough. I'm sorry to say that in my opinion Network could have tried harder with this particular set. And it seems to be an opinion shared by others.

Thanks for the comments, Anonymi! Or Anonymous if you're the same person. And if that's the case, there was certainly no censorship here. The original comment was conscripted to Blogger's new spam box. I guess maybe it automatically sorts an anonymous post of that length there? I don't know, but I welcome all comments and opinions, and I'm happy to hear them!

Thanks for straightening the record on The Protectors; I didn't realize it was the same prints as Carlton--or that the Carlton release was a good one. (They weren't always!)

As for my coverage of Network, you certainly do detect a bias: As I've stated many times, I unabashadely LOVE them! And I'll keep loving them for as long as they keep digging up rare ITC shows and spy things that nobody else is touching and putting them out there, and I will keep singing their praises. To me, any company that releases so much stuff that I like deserves the love. I also love Dorado in America and Fin de Siecle in Sweden for their commitment to releasing obscure Eurospy titles. They're smaller companies, though, and don't have nearly as many releases as Network does, so if I sing their praises less often, that's the only reason.

I try to report on the great majority of spy titles released. Granted, I can't help but overlook some (and if you notice that, please leave a comment or shoot me an email; it probably means that I don't know about it, and I'd love to hear!), and I definitely don't cover every modern, direct-to-DVD title with a spy angle. You've probably also detected a bias here toward spy films and TV of the Sixties and Seventies, because that is my primary interest. Anyway, in attempting to cover the majority of all spy releases, it quickly became apparent early on in doing this blog that the majority of those come from Network! It's sheer numbers; they're releasing the most classic spy material of any company in the world right now. So let me say again: I LOVE Network!

That doesn't mean that I love every show they release. I didn't love Saracen, for example, and I'm not loving The Four Just Men (although I can't deny I'm having fun with it). But I do love that they're available, which they hadn't been previously. It also doesn't mean that I think every release they put out is perfect.

It certainly would be nice to have gotten more extras on this new Protectors. Were I reviewing it, I would probably make note of that. But I won't be getting this release, because as you point out the extras are sparse (and apparently the picture isn't an improvement, either) and therefore not worth upgrading from my own Region 1 A&E sets, which are perfectly serviceable. I didn't know that the Umbrella version offered a commentary. Thanks for that tidbit! It's good to know, but also not worth re-buying for.

You make a great point about The Adventurer being a poorer series (not "arguably," in my opinion; DEFINITELY! In fact I'd go so far as to say that The Adventurer is a poorer series than almost anything you could throw up against it!) and getting better features, but I'm kind of glad. Because The Protectors is a good enough show that it stands on its own without features. The Adventurer isn't. But those special features (not just the booklet, but particularly the interviews with other cast members grumbling about Gene Barry!) make it great. In fact, The Adventurer is one of my favorite ITC shows to watch even though its utterly horrible, and I owe it completely to Network's release! When I try to get friends hooked on it (not an easy task, let me tell you!), I tell them to watch the special features first, because it makes the show way more enjoyable to know what was going on behind the scenes. Anyway, that's a tangent, but it's just another reason why I LOVE NETWORK.

Unlike Fox News, I don't promise to be fair and balanced. Everything I write on this blog will be seeped in my opinion. I know lots of Avengers fans preferred Dave Rogers' dry episode recaps (no offense to Rogers, who's created some invaluable resources), but I'm one of the ones who preferred The Avengers Files, riddled as it may have been with inaccuracies, because it's always more enjoyable for me to read someone's opinion. And that's what you'll get here: lots of opinion. And as long as Network is digging up great rarities like The Corridor People, you'll keep reading their praises here.

By that same token, though, I'm always eager to hear opposing opinions, so I appreciated your post (and definitely learned stuff I didn't know from it) and please don't hesitate to ever say when you disagree with me on anything. I welcome it!

(Oh, and did I mention? I love Network.)