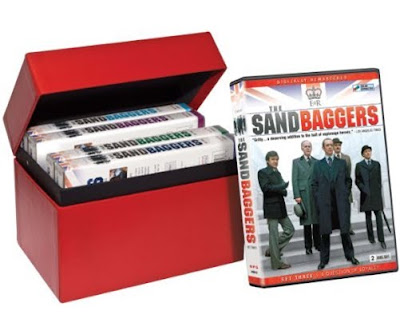 New Spy DVDs Out This Week: The Sandbaggers

This week BFS bundles their remastered Sandbaggers sets that came out to little fanfare last winter into the handy set The Sandbaggers: The Complete Collection.  While I can't fathom why the company chose to divide three seasons into five extra-chunky sets, I can attest that the remastered discs are actually a marked improvement over BFS's previous editions (which were available in three traditional season sets).  They don't add any new special features (though they do retain the scant but welcome ones from the original releases), but the picture quality is noticeably better... within the limits of Seventies British television with videotaped intereriors and exteriors shot on 16mm film, anyway.  But more important than the improved quality is the improved availability.  The Sandbaggers: The Complete Collection is a bit pricy with an SRP of $160, but consider that this is, along with Callan, one of the two best serious spy shows ever made.  The Sandbaggers is absolutely essential viewing for fans of the grittier, more realistic side of the genre.  That "custom-crafted, red presentation chest with gold foil lettering on the flip-top lid" doesn't look like much to write home about, but the "twenty digitally re-mastered and color corrected episodes" contained within are worth their weight in gold.  The individual sets (beginning with First Principles) are still available on their own, and may be a better buy.  However you choose to get them, though, no spy DVD library is complete without these remastered Sandbaggers sets.

I didn't do a DVD post last week because the only major release was Network's Region 2 PAL Mr. Palfrey of Westminster in the UK, and I'd just blogged about that the day before.  But Mr. Palfrey is another great serious spy show, and likely to appeal to fans of The Sandbaggers or, especially Callan.  A Region 1 version comes out stateside from Acorn next month.
Posted by Tanner at 7:30 PM

Your statement that Callan and The Sandbaggers are the best two serious spy shows ever… is entirely correct in every regard. Congratulations on your fantastic good taste!

..."entirely correct in every regard" apart from managing to omit mention of 'Tinker, Tailor'. Fail.

Tinker Tailor was a serial, not a series