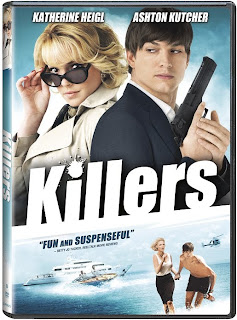 Lionsgate Home Entertainment has announced a September 7 release date for the Katherine Heigl/Ashton Kutcher spy comedy Killers on DVD and Blu-ray.  I had meant to check this one out in the theater, but missed it, so I'll definitely give it a try on DVD, even if Kutcher seems, to me, all wrong for the part as it was written.  Heigl plays a woman who falls in love with the perfect man and marries him... only to find out that he's actually a spy.  (My favorite line in the trailer was when he confessed that he worked for the "blah blah blah" and had a "license to blah.")  So when he accidentally brings his work home with him, that means gunfights and car chases in their perfect suburban neighborhood.  Tom Selleck plays her father, which is by far the most appealing casting in the film for me!  Extras on both the DVD and the Blu-ray include deleted, alternate and extended scenes, a gag reel and a featurette called “Killer Chemistry: Behind the Scenes with the Killers Cast.” Retail is $29.95 for the DVD and $39.95 for the Blu-ray, but of course both are available for pre-order much cheaper on Amazon and other online retailers.
Posted by Tanner at 11:59 AM