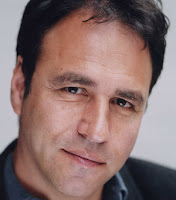 Horowitz noted that his books have gotten much darker and more challenging since Stormbreaker and Point Blanc, and he makes Scorpia Rising, which he declares definitively is "the very last one in the series," sound like the darkest of all.

"I can tell you without any doubt at all," he says to host Michelle Norris, "that there is no way forward.  The book is without any question the end of a very long journey that I have been taking.  I have to tell you that I, that it makes me very sad to think that I wrote the last words, a few nights ago in fact, and, uh, sat there looking at it and thought, 'Goodness, have you really done this?'  That makes nine in the series and then that is it, and it makes me sad, but I really believe this: it's best to quit while you're ahead.  Don't go on writing formulaic books simply to make money for your publishers and yourself....  I like to think that each book in its own way has been as good as or better than the one before, and I'm happy to quit on a high note with a body of work which I will look on it and feel is about as perfect as it could have been, and not write that one book that sort of spoils it."

The whole tone of the conversation, and the definitiveness that he emphasizes so strongly, makes it seem like poor Alex might not survive the book.  But when pressed for more details about the denoument, Horowitz did offer that "it ends with hope.  A children's author has one duty in life, I believe, and that is always to write with hope.  If you're young and you have, you know, everything in front of you, it is not the job of somebody like me to come along and say, 'actually life is awful and, you know, get used to it.'  It is a dark book and is in many ways a sad book, but I think it ends with hope."  Listen to the whole conversation on NPR's website, where you can also read Horowitz's tribute to Ian Fleming's Goldfinger, which he picks as his favorite thriller.  (It struck me as an odd choice.  It's actually one of my least favorite Fleming novels.)

The author revealed even more details about Scorpia Rising on his blog, including locations ranging from London to Paris to Gibralter to Egypt, a surprisingly real-world grounded villain named Kalid Aziz Al-Kazim who has worked for both Saddam Hussein and Al Qaeda, and even the overall structure of the book.  (Alex doesn't make an entrance until Chapter 7, conjuring shades of Ian Fleming's From Russia With Love.)  He actually reveals a surprising amount of plot details (including that at least one major character dies), so fans should be sure to head to his site and read the full post.  (Oh, yes, and he's also hidden the entire first chapter somewhere on his site, in case you needed even more incentive!)

The final Alex Rider novel isn't actually due out until 2011.

Read my review of the most recent Rider book, Crocodile Tears, here.
Posted by Tanner at 5:33 PM