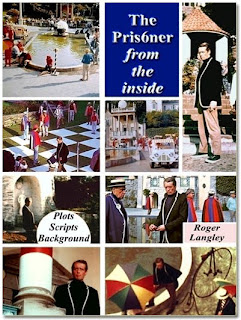 Wes Britton of The Spy Report has sent the alert that several new Prisoner-related publications by Six of One (Prisoner fan club) president Roger Langley have turned up on the official website of Portmeirion, the distinctive Welsh village in which the series was filmed.  They seem designed primarily for tourists visiting Portmeiron, but should definitely interest collectors and fans as well.  Among them are the 24-page Prisoner Series Guide, a pamphlet that serves as an overview to the series and contains "over 100 unseen photos," the awkwardly-titled but undoubtedly fascinating Portmeirion in "The Prisoner" and its History (whose 48 pages feature "all of the Portmeirion buildings and places ... along with the studio sets and backdrops which created a replica for indoor filming" and "views of old Portmeirion, maps and charts plus the 'Village Map' seen in The Prisoner"), and - most enticingly - The Pris6ner from The Inside: Plots, Scripts, Background. The latter is a 216-page book in which "the whole series is laid out for investigation: origins, action, plots, publicity, trivia, the Village, music, humour, extracts and conclusions."  It can be had for £7.99; the other two are just £2.99 apiece.  Of course if you're shopping in Portmeirion (or on the Portmeirion website), then you might want to save your pounds and dollars for the awesome big ticket items like the Prisoner ball chair (£395) or - best of all - the official Prisoner replica jacket (£125).
Posted by Tanner at 7:22 PM

I ordered five books and a t-shirt from Portmeirion, all thanks to you, Spi-Fi Brudda!

Great! I love pointing people in the direction of new spy media, whatever it may be.

And I love hearing that others spend as much as I do on all this stuff! Makes me feel better about it. :)