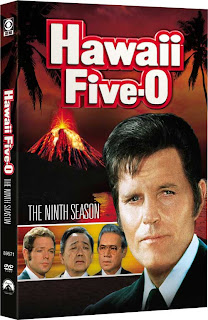 It's the rare week these days with no spy releases to speak of, on either side of the Atlantic... but I think this is one of them.  As luck would have it, however, I missed one last week: Hawaii Five-O: The Ninth Season.  Season 9 of the classic cop show has its share of espionage-themed episodes, starting right off the bat with a visit from Steve McGarrett's (Jack Lord, the first Felix Leiter) arch-foe, Chinese agent Wo Fat (Khigh Dhiegh), in the classic double-length season opener "Nine Dragons."  This one finds the intrepid McGarrett pursuing Wo Fat all the way to Hong Kong, only to be captured and tortured (recalling their first confrontation in Season 1's "Cocoon").  It's essentially a TV spy movie to kick things off!  "Man on Fire" deals with nuclear terrorists producing their own weapons in Hawaii, and in "Tour de Force - Killer Aboard" the dead body of an American agent found on board an incoming flight leads McGarrett to an assassination attempt at an OPEC conference. "To Kill A Mind" also delves into the murky world of spies, when pieces of a sunken Russian submarine lure foreign agents to Hawaii.  Even the episodes that aren't directly spy-related seem spy-like to me.  That's why this cop show has always stood above the plethora of others in my mind.  Its action, its music, its exotic setting and its iconic hero all fit in well with the spy genre.

With the ninth season, CBS/Paramount has switched the packaging for Hawaii Five-O, but they've done it in as unobtrusive a way as possible.  They've switched to the "flipper" style cases that store six discs in a case the same width as an ordinary DVD, which I greatly prefer.  But to maintain continuity on your shelf with all the other, thicker seasons, they've also wrapped a slick slipcase around the case, so the set still looks of a piece with all the others, even if you store them end-out, like I do.  I applaud this space-saving change, and appreciate that the studio went to great lengths to make it match.  Hawaii Five-O: The Ninth Season retails for $49.99, but naturally its cheaper on Amazon and other online retailers.