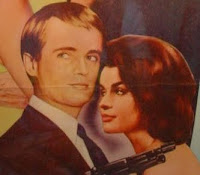 Remember just a few scant years ago when The Man From U.N.C.L.E. was still conspicuously absent on DVD?  Fans clamored for it forever, it seemed, before we finally got word that it would come out in season sets from Anchor Bay, and that Robert Vaughn and David McCallum had recorded new commentary tracks for the release.  It was very exciting.  Then that excitement was quickly dashed when Warner Bros. took the wind out of Anchor Bay's sails by issuing a cease-and-desist on the project, and asserting that they owned the rights to the classic spy series.  (It was particularly frustrating at the time, because then they didn't seem to have any plans to actually do anything with those rights.  Obviously that situation changed when they put out a really excellent and feature-laden collection through Time-Life a few years later.)  Well, all's well that ends well, and we all kind of forgot about that Anchor Bay situation when the official release happened.  But I always kind of wondered what went on there, and how a major distributor could be duped into thinking they had the rights to such a major license when they didn't.  (And what happened to those commentaries!)  Now we have some of those answers, thanks to a story in yesterday's Hollywood Reporter.

According to the trade, "a Los Angeles jury has awarded $7.3 million to Anchor Bay Entertainment from a woman who was accused of selling rights to the classic TV series The Man From U.N.C.L.E. that she didn't own. Lindsay Dunlap and her Ember Entertainment were on trial for fraud and breaching a 2005 contract with Anchor Bay."  Apparently the fact that she could produce the masters and "footage for DVD extras" was enough to convince Anchor Bay she was on the level, and the company paid her $625,000.  Obviously, they've now been recompensated and then some.  But my biggest question remains: what happened to those commentaries that Anchor Bay recorded, and will they ever see the ligh of day?
Posted by Tanner at 12:34 PM