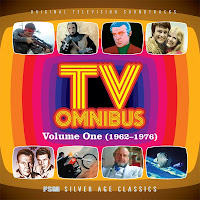 Well, this is an obscure one!  Film Score Monthly has announced their latest Silver Age Classics soundtrack CD release, and it's a box set of rare TV music from the Sixties and Seventies, including the score music to a few made-for-television spy movies and an eight episode Robert Conrad spy series so obscure it's not available on DVD.  I've never seen Assignment: Vienna, although I've wanted to ever since I got into The Wild Wild West (if anyone has it, please shoot me an email!), so I can't really speak to its music, but I certainly never expected to see a soundtrack released.  Assignment: Vienna music by Dave Grusin (The Man From U.N.C.L.E.) and John Parker (CHiPs) takes up the better part of two CDs out of the five that comprise the box set TV Omnibus Volume One (1962-1976).  Among the tracks included are some vocal tracks (available for the first time in their entirety) performed in the bar that Conrad's chracter runs as a cover. A George Romanis track from the TV pilot movie that spawned the series, Assignment: Munich (not only was the city different, but so was the star; Roy Scheider played American spy Jake Webster instead of Conrad) is also included.

But that's not the only spy music in this collection!  There's also the soundtrack by Billy Goldenberg to a possibly even more obscure TV movie called High Risk.  This was a failed pilot for a Mission: Impossible-style show about a group of former circus performers recruited to pull off daring heists for the U.S. government.  Victor Buono and Don Stroud starred.  The composer of the actual Mission: Impossible, Lalo Schifrin, is also represented, via his score for the sci-fi pilot Earth II.  Other composers featured on TV Omnibus Volume One inlcude John Williams, Gil Mellé, George Duning, Jerry Fielding and Leonard Rosenman on such short-lived series and TV movies as Then Came Bronson, The Deadly Tower, The Phantom of Hollywood and The Eleventh Hour.  The set comes with a 32-page booklet including "extensive background notes by film and TV music historian Jon Burlingame, plus stills and artwork."  And because even a booklet that generous couldn't contain all the liner notes they wanted to include, FSM has also made additional notes available online!  These detailed notes are well worth reading for some further background information on these shows and to better guage if this is a release you'd be interested in getting.

TV Omnibus Volume One (1962-1976) is available from Screen Archives Entertainment for $59.95.  The edition is strictly limited to 2000 units.  You can listen to clips from many of these shows (including Assignment: Vienna) on SAE's website.
Posted by Tanner at 6:37 PM

Thanks, Lee! I've fixed it above. I guess that's what happens when I venture into a genre I don't know anything about... I was indeed thinking about Planet Earth, with John Saxon, which is kind of weird that I've seen considering I've only ever seen two or three episodes of Star Trek. But I liked it. Never seen Earth II, but Schifrin's generally reliable.