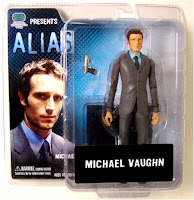 According to The Hollywood Reporter, Alias co-star Michael Vartan is the latest actor to board one of Luc Besson's EuropaCorp-produced neo-Eurospy movies.  But I'm not quite sure how to frame this story: is he the latest Eurospy hero, or is he the next Eurospy babe?  Most (but not all) of these Besson-produced mid-budget action movies feature both, and I always try to cover that casting.  Despite Vaughn's occasional action heroics on Alias, Vartan seems a little soft to carry an action movie on his own.  And he won't.  Once more, he'll play second fiddle to a much stronger female lead.  The movie he's joining is Columbiana, the one we heard about earlier this year set to star Star Trek's Zoe Saldana as the first woman action hero in one of these neo-Eurospy movies.  So if she's the hero, then perhaps Vartan is merely the babe.  It sure sounds like it: "Vartan will play Saldana's boyfriend, an artist with no idea what she does for a living who is her only link to normalcy."  What she does for a living (in case you've forgotten) is killing people, all the while hoping to take revenge on the gangsters who murdered her family when she was a child.  Besson (who created another enduring female assassin character two decades ago in La Femme Nikita) co-wrote the script with his Taken collaborator Robert Mark Kamen; Transporter 3's Olivier Megaton is directing.

The trade reports that "production will begin in late summer in Chicago, New Orleans and Mexico City. The action thriller is set to be released Sept. 2, 2011."
Posted by Tanner at 11:48 AM