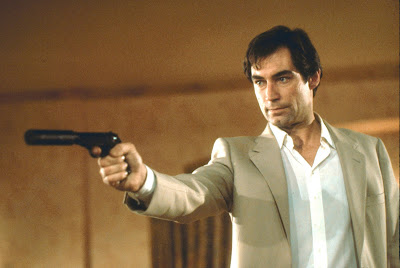 Tradecraft: T-Dalt Joins Chuck
According to Deadline Hollywood, the great Timothy Dalton will continue his 2010 career resurgence (begun in Toy Story 3 and continuing this winter in The Tourist with Johnny Depp and Angelina Jolie) by appearing on the NBC spy series Chuck.  The trade blog reports that Dalton will play "a mysterious stranger who has a history with Chuck’s mom (Linda Hamilton)." Wow, this is great news!  As cool as when Roger Moore turned up on Alias! I'm definitely going to have to start watching Chuck again.  (I confess, I fell behind and eventually gave up during this last season.)  Not only was Timothy Dalton one of the very best Bonds, but he's also one of the best actors working today (just watch Hot Fuzz if you need any further proof!), and it's a shame he hasn't gotten more high profile roles these past few years.  Hopefully this year marks a full-on comeback.  I want to see T-Dalt everywhere come 2011!  (Watching The Expendables, I felt like he would have been a good addition to the cast as a wrongly overlooked Eighties action star.)  Deadline adds that this is Dalton's first TV series role since a guest spot on Charlie's Angels way back in 1979.
Posted by Tanner at 1:52 AM

Much as I love Dalton, he would've been an ill fit in The Expendables.

Maybe not, but if not probably only because of the presence of Statham. Two Brits might throw off the vibe. But while he goes against the uber-muscled tough guy image of the rest of the macho cast, I think his presence would have been an interesting foil to that persona. And I think he would fit in in terms of the nostalgia. At first I was thinking, "Hm, is there a place for the 80s Bond in that batch?" I pictured Roger Moore, and he definitely would not have fit in. Then I thought of Dalton, whose Licence To Kill isn't that far from what some of these guys were doing then, and I figured he might. It would have been neat to contrast the two different action man images.

Not that the movie needed him though. (Who the movie desperately needed was Van Damme!)

You can catch up on CHUCK Season 3 when it comes out on DVD and Blue-Ray September 7th!

I loooooooove Chuck, and I'm pumped for this as I love TD as well.