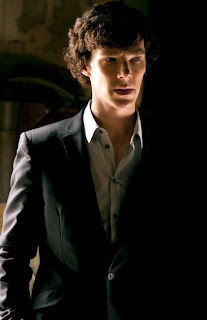 One of fiction's greatest minds will soon assist another.  According to Dark Horizons, the (London) Sunday Times has revealed that Benedict Cumberbatch, who plays the titular detective on the BBC's new modern day-set Sherlock (co-created by the great Mark Gatiss) will play George Smiley's right-hand man Peter Guillam in the new feature adaptation of John Le Carré's spy classic Tinker, Tailor, Soldier, Spy.  As previously reported, Peter Morgan (Frost/Nixon, Bond 23) has penned the script and Tomas Alfredson (Let the Right One In) will direct; Gary Oldman plays the latest screen incarnation of Le Carré's peerless spymaster George Smiley.  I'm not that familiar with Cumberbatch's work yet, but Sherlock is my most anticipated TV show of the year... and the wait for it to come to PBS in America this fall after a successful summer run in England is killing me!  I'm a tad surprised by this news, though, as I'd pegged Michael Fassbender (Inglourious Basterds) for that role.  Now I'm not sure who he'll be.  Fassbender, Ralf Fiennes, David Thewlis and Colin Firth have all previously been connected with the film, though none have been confirmed.  My guess would be that Firth will play Hayden, Fiennes Estherhase, and Thewlis Alleline (which I guess would leave Fassbender as Bland, which seems kind of odd; he's too young to be Prideaux... oh, maybe he's Ricky Tarr?), but all of those actors are chameleon enough that each of them could pretty much play any of those guys.  (Fiennes may well turn out to be Hayden; it's a toss-up as to whether he or Firth more quintessentially embodies that particular breed of upper class English gentleman.) Anyway, those are pure speculation; I'll be very curious to see how it all pans out.  This film remains foremost among upcoming spy movies on my radar!

Guillam is the head of "the scalphunters," the dirty tricks branch of the Secret Service, roughly equilivant to the Sandbaggers or the Section or the Minders or the Double-O's in various other fictions.  He becomes Smiley's ally in ferreting out the mole inside The Circus (as MI6 is referred to in Le Carré's world) by virtue of being young enough to rule out as a suspect himself.  (At 34, Cumberbatch might be just a tad too young... but certainly close enough.)  Michael Jayston (who went on to play 007 in a BBC radio adaptation of "You Only Live Twice") played Guillam in the 1979 mini-series version of Tinker, Tailor, Soldier, Spy starring Alec Guinness; Michael Byrne (Saracen) stepped into the role for the 1982 follow-up, Smiley's People.

Cumberbatch, who also made another movie about a mole hunt at MI6, The Cambridge Spies, looks on track for Hollywood stardom. Besides this, he's also been cast in Steven Spielberg's next movie, Warhorse.  Let's hope Gatiss and Steven Moffat and the BBC have him locked down for at least a few more seasons as Holmes!
Posted by Tanner at 2:20 PM

He was great as a modern take on Sherlock Holmes.

Thanks to torrents I did not have to wait till late October.

I know it's out there and I was tempted, but I can't do it. I'm looking forward to this so much that I need to see it on my TV screen, not my crappy laptop monitor. Plus, I really want to be excited for something on Masterpiece Mystery again! (I may break down and import the UK DVD out at the end of this month, though... We'll see how much strength I can summon!)

You should check out Cumberbatch's work as Steven Hawking in Hawking (BAFTA nominated performance) and as Van Gogh in the BBC drama Painted with Words. Incredible performance. All of Hawking is on You tube Some Van Gogh clips are on You tube. He also starred in the awesoem BBC series To The Ends of the Earth based on william Golding's famous books. The actor hasnt put a foot wrong in any of his performances.