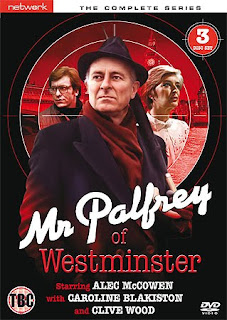 Mr. Palfrey of Westminster will soon be paying a visit to DVD stores in both the United States and England, courtesy of Acorn Media and Network, respectively.  Who is Mr. Palfrey?  Embodied by Alec McCowan (probably best known to spy fans as Algernon, Never Say Never Again's Q), Mr. Palfrey would describe himself as "just a civil servant."  Others might see him as a bespectaled, somewhat Smiley-esque (in his unassuming appearance, anyway, if not his rather smug manner) master of counter-espionage and spycatcher extraordinaire.  Week after week, he devises elaborate schemes to ensnare moles and plug security leaks.  Palfrey is aided by a capable legman, or "plumber" ("I plug leaks.") named Blair and a secretary named Caroline (Briony McRoberts), and reports to a Thatcher-esque female boss known only as "the Co-Ordinator" (Caroline Blakiston). It's sort of like Mission: Impossible meets Tinker, Tailor, Soldier, Spy. Network's Region 2 release is an Amazon exclusive, available only from Amazon.co.uk (where it comes out tomorrow, August 16, and can be pre-ordered for £18.69).
In addition to both regular seasons of the show (originally broadcast in 1983 and '84), Network's release includes the pilot, an episode of Thames’ anthology series Storyboard, and a 1989 "postscript" featuring Clive Wood's character.
Acorn's 3-disc Region 1 release, due out on September 21, includes every episode of the regular series (both seasons), but sadly not the pilot or postscript.  However, that shouldn't stop American spy fans from picking it up.  I've just watched the first proper episode on Acorn's set, and it sets up all of the characters and their relationships.  In fact, Mr. Palfrey meets his new boss and his regular associates for the first time, so I'm not sure what that Storyboard episode could have entailed.
That first episode is written by George Markstein, a man with some experience of his own in the intelligence world well known to fans of the genre for his contributions to The Prisoner and Callan, among other series.  His script actually pays homage to Callan and places Mr. Palfrey of Westminster firmly in the same world as that great show.  (In a tale of inter-agency miscommunication, Mr. Palfrey comes up against an assassin from "the Section," Callan's shadowy branch of the intelligence community.) Another frequent spy writer, Philip Broadley (The Avengers, Department S) also contributes scripts, and guest stars include genre alumni like Richard Johnson, Julian Glover, Ronald Hines and Martin Jarvis.
I started writing this post nearly a month ago when both companies first announced the show, and it got buried for a while.  But reading about it then triggered some important connections in my brain.  For some reason, I had long believed as a kid that Alec McCowan played Smiley.  Now these memories aren't actually based on my own viewings of Tinker, Tailor, Soldier, Spy or Mr. Palfrey of Westminster (both of which aired on PBS in the US), but on memories of my parents watching them when I was far too young to appreciate such political skullduggery.  Anyway, I was always sure that I wasn't merely mising up Alecs McCowan and Guinness; my memories seemed too concrete.  And now I finally realize why I thought that; I was mixing up Smiley with Mr. Palfrey!  It's good to put that together.  At any rate, I'm very excited to discover Mr. Palfrey's adventures in Whitehall.
Posted by Tanner at 5:33 PM

Er, Network's MR PALFREY is not 'exclusive' to anyone - certainly not Amazon. It is available from today not only from Network themselves but also other online retailers, of which Amazon is just one.

In fact, for anyone in the UK, Network are the cheapest option at present. Amazon.co.uk are aksing £18.69 for MR PALFREY while Network are charging £14.99.

Reading this made me think of...

Any chance you're going to talk about Rubicon on this blog? Seems to be the kind of series you'd be trumpeting very loudly, and yet not a single peep yet. It's the closest thing I've seen to Tinker, Tailor, etc... to come out of the US and it's happening now - not in the past.

That Amazon Exclusive information was given to me by Network. I didn't mean to mislead anyone. If you can get it cheaper elsewhere, by all means do so!

I've got Rubicon piling up on my DVR, but haven't had a chance to watch any yet. Your comparison to Le Carre certainly has me very excited to do so, though! Hopefully soon...

cool man.. thanks for the response on my comment for Rubicon. I think you'll really dig it - and it can use all the publicity it can get. I want to see more of this kind of stuff. It's all too rare.

Covert Affairs certainly has turned out to be better than I thought too. TV folks can't seem to handle a pretty girl without throwing in a pile of romance/sex. And so far, they've managed to avoid those pitfalls and focus on twisting plots and using her femininity as a true weapon rather than as a cheap gimmick. Hope they can keep it up!

Er no problem Tanner - I wasn't criticising, merely trying to correct something. I don't know what it is with Network but they have a habit of giving out info which is misleading or just plain untrue. I suspect this is more their distribution agents, SONY DADC, rather than any of Network's own 'creative' staff.

You do a great job of bringing people's attention to these various DVDs (Network or otherwise) and it's in part due to some of your reviews that I have bought some of them!