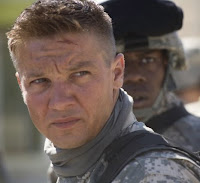 star and Best Actor nominee Jeremy Renner has been cast as a new IMF agent opposite returning series star Tom Cruise, who will reprise his Ethan Hunt role, in the Brad Bird-directed Mission: Impossible 4.  This news comes days after Fleming reported that the studio was looking at young actors like Anthony Mackie (Renner's Hurt Locker co-star), Kevin Zegers (Gossip Girl) and Christopher Egan (Letters to Juliet).  Renner, who next stars in Ben Affleck's crime thriller The Town, is almost 40.  The trade blog reports that their screen tests have been cancelled, but it's still unclear whether Renner's been cast in the same role that the younger actors were up for, or whether that's a separate part still up for grabs.  At any rate, the casting of Renner clearly recalls the casting of another rugged, very serious blond actor pushing forty (with similar looks, even) cast to anchor a major spy franchise: Daniel Craig.  (Fleming even quotes a top Paramount executive as citing Renner's "Daniel Craig quality.") I'm not sure the super-serious Daniel Craig route that's been so successfull for the James Bond series is the right way to go for Mission: Impossible, but as for Craig, I have a lot of respect for Renner as an actor, so I'm game to see what he brings to the table.  I'm also elated to see that the Bond movies are now back on top when it comes to leading the way for other spy franchises!  (Renner is not a "Matt Damon type.")

Paramount have been keen to cast a marketable co-star ever since Cruise's entertaining spy parody Knight and Day (review here) failed at the American box office.  So does Jeremy Renner have what it takes to accept the torch from Cruise and carry on the franchise?  Perhaps, but he's unproven as a box office star.  (Despite winning the Oscar for Best Picture, The Hurt Locker was not a big financial hit.)  I still stand by what I said then: the studio should steer the film franchise back towards its TV roots, and make it more of an ensemble series.  Good Mission: Impossible stories depend on a team of experts in various fields working together to pull off miraculous heists and cons against enemies of the state.  J.J. Abrams brought more of that aspect to his Mission: Impossible III than either of the previous two films had, and it was a step in the right direction.  But while that team worked, we've only heard about Simon Pegg (who had a small, deskbound role) and Ving Rhames (who's been in all the M:I movies so far) signing on to return, not Jonathan Rhys-Meyers or Maggie Q, both of whom had much more to do in the field.  Whether those two return or a whole new team is brought in, I would still love to see Abrams and Bird return the series to the team formula.  That way, Renner will have lots of familiar faces to back him up next time, and Cruise can be easily shuffled out the way Steven Hill's Dan Briggs made way for Peter Graves' iconic Jim Phelps on the TV show.

This is Renner's second high-profile spy casting since his Hurt Locker Oscar nomination.  As previously reported, he will also play S.H.I.E.L.D. agent "Hawkeye" in Joss Whedon's Marvel superhero jam The Avengers (no relation to the real Avengers). Today's  Deadline Hollywood story also reveals (for the first time, I think) Mission: Impossible 4's shooting locations, which show a lot of potential: according ot the trade blog, "The film will shoot in the U.S., Vancouver, Prague and Dubai." And, presumably, the Paramount backlot, if they want to show any deference to the TV show!