I was nonplussed by the clip from the pilot that circulated after the CW's upfront presentation, but it's hard to ignore the very sexy (and very red) marketing campaign for the network's new TV version of La Femme Nikita, now called simply Nikita and embodied by the beautiful Maggie Q (Mission: Impossible III).  These poster and banner images seem to adorn all the busstops and billboards in LA right now, which is certainly not a bad thing. While that clip belied a budget lower than we're currently used to seeing from spy TV (Judge Dredd director Danny Cannon recently bragged about delivering the pilot for a paltry sum), the full trailer on the show's official site looks far more promising.  Those interested in the fourth incarnation of the female assassin created two decades ago by Luc Besson should be sure to head over there, where you can also check out the Nikita panel from Comic-Con and other behind-the-scenes videos. 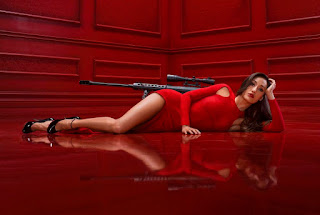