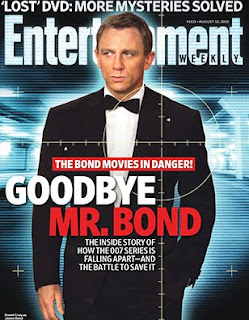 The fear-mongering yellow press is at it again, drumming up rumors about James Bond's imminent demise.  But at least it means a new Entertainment Weekly Bond cover - and a pretty snazzy one at that.  The story itself (under the dramatic headline "Goodbye, Mr. Bond") appears to be little more than regurgitated rumors and heresay combined with new quotes from former and rival studio executives who stand to benefit from prematurely heralding the death of 007.  Of course the subject is MGM's financial woes that currently have the next Bond film on hold.  They even invoke the nightmarish six-year gap that Bond fans had to suffer between 1989 and 1995 - and unfairly lay the blame for that on poor Timothy Dalton.  Relax, guys.  James Bond has survived the worst villains in the world and he'll survive this latest hurdle as well, no matter how long it takes to weather the storm.  (I just hope Daniel Craig sticks around!)  Chicken Little quotes like “You lose too much momentum. Even for Bond, it could be deadly” (from a gleeful former MGM exec) are nothing more than the padding required to turn a nonstory into a cover story on a slow news week.  But as I said, we do get a cool new Bond cover for our collections!
Posted by Tanner at 4:33 PM

The Broccoli's should have untangled themselves from MGM decades ago. The once venerable Lion has been at death's door countless times in the last 30 years. Now they reached new lows- so broke they can't put together a Bond movie after two BLOCKBUSTER entries.

And you're right, poor Timothy did his darnedest. But after "License To Kill (the greatest movie Steven Segal never made)," the series (for me) seemed shopworn, which didn't help in a time of another MGM debacle.

I imagine that Bond will survive this latest crisis. Although I do hope they get someone better than Daniel Craig for the next movie. He's definitely my least favourite Bond so far.

I'm sure the Broccolis would have LOVED to have "untangled" themselves from MGM years ago, but they've never had the opportunity. As I understand it, MGM acquired Harry Saltzman's half of the rights (and that's a GREATLY simplified version of complex legal events), and obviously wouldn't give them up. I think if the studio DOES go into bankruptcy, then the Broccolis might have a CHANCE to buy their half of the rights--but probably wouldn't be able to afford them when competing against other STUDIOS. After all, the Bond rights are the great majority of the wealth of all of MGM, and WB recently offered $1.5 billion for that. I wouldn't want bankruptcy to happen, though, because I suspect the legal battle untangling the Bond rights would go on for YEARS, and we wouldn't see another Bond film for a long, long, loooong time.

And, yeah, it's definitely too bad that Dalton didn't get to play Bond at a more creatively and materially wealthy time for the franchise and the studio. LTK's lower budget does show. I would have LOVED it if we'd gotten two more Bond movies out of Dalton in '91 and '93, but I suspect they might have looked a lot like Son of the Pink Panther, which looks VERY low budget indeed.

Dfordoom and Delmo, I understand your points of vew about Craig, but I can't share it. I didn't like Quantum, but I LOVED CR, and I really like Craig. I hope this mess can be sorted out in time to give him at least one more movie. We still haven't seen his Bond actually become the suave Bond we know and love yet, and it would be a shame if that never happened.