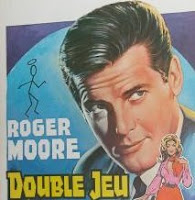 TVShowsOnDVD reports that Universal has begun advertising Alfred Hitchcock Presents - Season Four–though a specific release date has not yet been announced. Why is this of interest to spy fans? Season Four contains the episode "The Avon Emeralds," guest-starring a young Roger Moore as "Inspector Benson." Sir Roger recalls in his autobiography, "The series was topped and tailed by a speech from the great man himself, but of course he was never around the set. My episode was 'The Avon Emeralds' with Hazel Court as my co-star. I don't think it was particularly memorable, but it did keep me in LA and in the thick of where it was all happening." Memorable or not, I'm glad that it kept Moore in the thick of it and I'm dying to see it! Now if only someone would get around to releasing his season of Maverick on DVD...
Posted by Tanner at 5:40 PM

I'm surprised that WB has not released Maverick on dvd, that trial single dvd release notwithstanding.

Yeah, me too. All I can figure is that there must be some rights hang-up, because why the heck not??? And I mean ANY season! Even when they do release the Garner seasons, I kind of worry that they might drag their feet with the final Moore/Kelly one. They rarely play those episodes in syndication... which makes me want a DVD release even more! The only Moore episodes I've ever seen are his first as a regular, "The Bundle From Britain," and the one that he guest-starred on as a different character during an earlier season. (In fact, that one was just on last week.)

You need to get the Encore Western Channel where they run back-to-back Maverick Episodes every weeknight. Moore is very good on par with the B&W Saint: the problem is the stories get very repeditive (how many times can Bart, Brett, etc, get framed for murder?) especially at that daily pace.-plotter