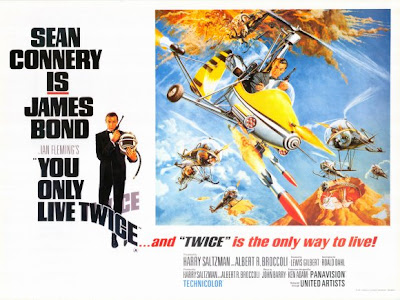 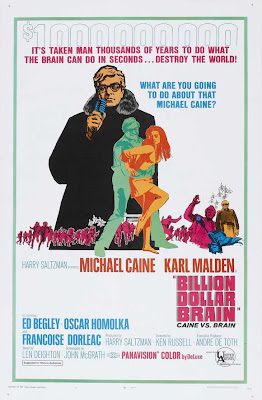 Upcoming Spy Screenings: Fantastic Harry Saltzman Double Feature In Los Angeles
Attention LA spy fans!  Here is an event you will not want to miss!  It's one film short of being the ultimate 1967 spy triple feature, but it is the ultimate Harry Saltzman 1967 spy double feature.  Los Angeles' awesome New Beverly Cinema (recently purchased by Quentin Tarantino) will screen You Only Live Twice and Billion Dollar Brain on Wednesday and Thursday, August 18 and 19.  Really, that's one of the best double features I can imagine.  It's the LA spy event of the year!  We're lucky enough to see James Bond double features fairly regularly in this city, between the New Bev and the Egyptian and the Aero.  But the idea of pairing Bond with Harry Palmer was truly inspired... particularly those two titles from the same year.  I love all three Sixties Harry Palmer movies, but Ken Russell's phantasmagorical third film has become my favorite over the years (as I've written about extensively in the past).  And, honestly, you've never seen it if you haven't seen it on the big screen.  This will be a fantastic evening at the cinema with Sean Connery and Michael Caine.  Personally, I plan on attending the Thursday night show.  Shoot me an email if you're in the area and want to meet up.
You Only Live Twice starts at 7:30; Billion Dollar Brain follows at 9:50. You can purchase tickets online here.
Read my review of Billion Dollar Brain here.
Posted by Tanner at 10:16 PM

Billion Dollar Brain is such an underrated movie.

Unknown said...
This comment has been removed by the author.
1:24 AM

You're right, Big O; it would be fantastic if the New Beverly ever did a Eurospy program--or even just a double feature. It's been a few years now since the Egyptian did Deadlier Than the Male and Lightning Bolt as part of their Mods and Rockers fest. They used to show a lot of Eurospy stuff there--Modesty Blaise, Otley, Sebastian, The Million Eyes of Sumuru, to name a few off the top of my head. Unfortunately, now the festival has become nothing more than a few weekends of music documentaries, and not the month-long celebration of Sixties cinema that it used to be. It's sad.

Hopefully we'll see more Eurospies on the bigscreen in LA, but in the meantime, this New Bev double feature is about the best I can imagine!