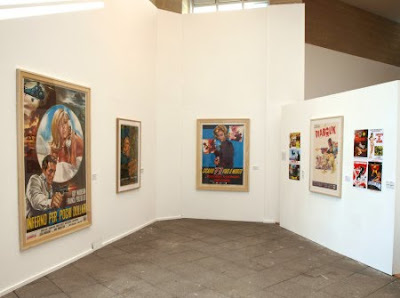 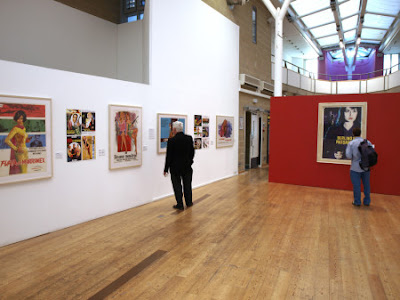 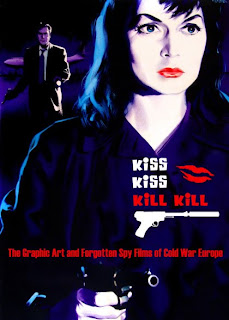 The Spy Event Of The Year: Kiss Kiss Kill Kill Symposium This Weekend
How cool does this exhibition look?  How cool would it be to be there, ogling all those awesome Eurospy posters?  Well, if you live in England--particularly if you live anywhere near Hatfield--then you can.  And I envy you.  A lot.  In fact, when I posted about another UK event that made me jealous of all Brits this past summer and commented that there was one event I was dying to fly over there for, this is the one I was takling about: the Kiss Kiss Kill Kill exhibition and symposium. 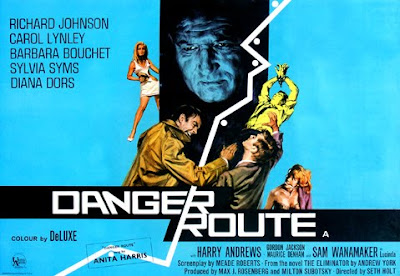 The exhibition, which runs through October 16, is what you see in those pictures.  Galleries full of rare, awesome Eurospy poster art!  Or, to put it in the academic terms preferred by its organizers, "The Graphic Art and Forgotten Spy Films of Cold War Europe." And what amazing art it is!

I love Eurospy poster art.  In fact, the poster is often my favorite part of a Eurospy movie. Not only is the artwork often fantastic, evoking and even sometimes surpassing the best of McGinniss and McCarthy, but the artwork is not constrained by the meagre budgets that so often limit the movies themselves.  The posters promise so much more than they can usually deliver, but that's okay; they're spy stories unto themselves.  On paper, these Eurospy movies are equal to the Bond movies they aspire to.  Equal to or even greater than.  They have just as much atmosphere, just as much action, just as many explosions and beautiful women, and heroes just as suave as 007.  When you actually see the movies and actors like Ray Danton or Tony Kendall open their mouths, well, they're not actually as charming as Sean Connery.  But on paper, in vibrant, lurid color, they are. 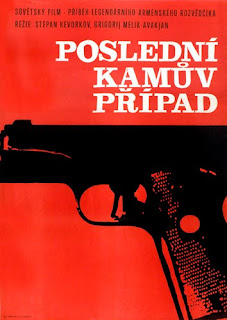 Or else, as in most of the examples here, the posters are stark and graphically striking, promising a classier movie than you generally get. Bear in mind, of course, that I love Eurospy movies even despite all these budgetary limitations.  I just love their posters even more, which are free to present these movies as they want to be, as their directors dream them to be. And the idea of an entire exhibition devoted to them is positively mouthwatering.

But there's more to Kiss Kiss Kill Kill than just an exibition. As I mentioned, there is also a symposium, and this is where it gets really good. This is what I wish I could afford to fly to England for. And this is what's happening this weekend. Here's the official description: 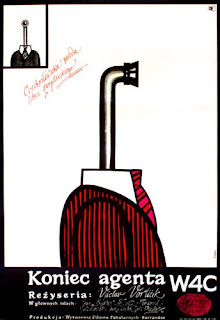 An international symposium: The Forgotten Spy Films of Cold War Europe - the first of its kind ever staged, accompanies the Kiss Kiss Kill Kill exhibition. This full day event will include contributions from British and international specialists who will debate the ‘Eurospy’ genre across three thematic strands: Real Life Spies and Kitsch and Transnational Appropriation . The day will also include a showing of the forgotten spy classic Danger Route (Seth Holt, GB 1968).

Okay, just that screening of Danger Route alone would make the trip worthwhile.  But let's take a look at some of the topics under discussion.


For starters, there's a Keynote Address by Matt Blake, co-author of the indispensible Eurospy Guide.  This guy's one of the experts on the field!  Just to see him speak I'd fly across an ocean if I could afford it.  Then there are the amazing paper topics being presented, just a few of which include include the likes of "Real Life Spies: Cold War, German Espionage and Italian Cops," "Espionage Cinema and the Celluloid Curtain," "Eurospy’s Tawdry Underbelly: Photographer Gundula Schulze Eldowy and the East German Secret Police," "Kitsch and Transnational Appropriation," "Genre Smasher: A Popular Culture Analysis of Turkish B Rate Film with Espionage Themes," and my personal favorite, "'You’re really a miniature Bond': Weng Weng and the transnational dimensions of cult film stardom," all presented by top academics. Did you just read that last one? It's an academic presentation about Weng Weng, the diminutive secret agent star of Philipino exploitation films like For Your Height Only!  Where else are you ever going to find that? Finally, there's a closing keynote speech by Richard Rhys Davies on “The European-ness of Eurospy: Myth, Motif and Mayhem in Western European Spy Cinema.” Who is Richard Rhys Davies, you ask?

Well, this gives me the opportunity to plug one of my favorite new sites on the internet, The Kiss Kiss Kill Kill Archive.  I quietly added it to my Spy Links when the site went live, but I've never given it the proper write-up it deserves.  The Kiss Kiss Kill Kill Archive (appropriately named after one of the Kommissar X flicks) is an essential resource for Eurospy enthusiasts, and it's maintained by Richard Rhys Davies, who is also the brain behind the Kiss Kiss Kill Kill exhibition and symposium!  (I think many of the posters on display even come from Richard's highly impressive personal collection.)  His website contains a whole virtual gallery of tons and tons of amazing Eurospy posters, as well as thoughtful, well-written reviews of many of the films themselves--including some very rare ones.  I really do mean that it's essential.  Richard is one of the most knowledgeable individuals in the world on the subject of spy films.  And you can also peruse the full, highly impressive schedule of events on his website. (That's right; I didn't even list them all!  There's more!)

The Kiss Kiss Kill Kill Symposium happens this Saturday at the University of Hertfordshire Art and Design Gallery, College Lane, Hatfield AL10 9AB. The exhibition runs through mid-October.  Find full details on all events, including schedules and booking information, on The Kiss Kiss Kill Kill Archive.  If you're in the area and you like spies at all, definitely go check this out! And tell them the Double O Section sent you. Because I'll be stuck here in America, jealously thinking of all the fun you're having over there this weekend. Turst me: this is the spy event of the year!
Posted by Tanner at 12:09 AM

This is why credit cards exist. I've been to London 4 times and, if not for my credit card, I would've never been able to afford to go.

just seen of their website that another event is planned in London from may 2nd till may 9th 2011 .