TV Review: Nikita Pilot (2010)
The spy season began in earnest this week with the series premiere of The CW’s newest version of La Femme Nikita, simply titled Nikita. Nikita is the opening salvo in a fall television season as rife with secret agents as any since the Sixties. The character of Nikita began life in Luc Besson’s 1990 French film Nikita, released in America as La Femme Nikita and starring Anne Parillaud in the title role. It was a great movie, but hardly the most original premise. It’s basically Remo Williams

meets My Fair Lady (with perhaps a dash of Callan thrown in for good measure*): a punk street kid is arrested for murder after a drug-related robbery gone wrong, her execution is faked, and instead she’s pressed into service for a top secret government agency, given no choice but to become a highly trained assassin. That’s not all she’s trained in, though. Her handler proves to be a closet Henry Higgins, and she’s trained to be a proper lady as well. The character showed a remarkable shelf life that no one could have guessed at back then, sustaining an unsanctioned 1991 Hong Kong remake, Black Cat (which also spawned a sequel), a 1993 American remake, Point of No Return (starring Bridget Fonda), a Canadian TV series (called La Femme Nikita again) that ran on the USA cable network from 1997-2001, starring Peta Wilson, and now another, unrelated TV version.

Nikita’s latest incarnation is very much its own animal, but full of homages to past versions. Instead of following the basic Nikita story of a violent girl plucked off the streets and trained to spy, this series picks up six years after that all happened, with Nikita on the run, having escaped her mysterious government handlers three years ago, and prepared to take the fight back to them. Even though the origin scene (for Alex, a new recruit, though, not Nikita) is right out of Besson’s film, the new show seems to owe more to Joss Whedon’s Dollhouse than any previous version of the Nikita story. There’s a whole stable of spy recruits who train in a big white gym for a shadowy organization known this time around as “Division.” There’s a tough, security-conscious male boss (24's Xander Berkeley) and a poised female one (Melinda Clarke, ably holding her own in a role previously played by Jeanne Moreau and Anne Bancroft). There’s a nerdy tech guy who looks (but doesn’t sound) like he just stepped off a Whedon set. Nikita is actually an improvement over Dollhouse in one respect, since it simplifies the premise (dropping the whole “programming empty vessels” thing), but doesn’t come close to living up to the Whedon show from a character perspective. Or to matching his snappy dialogue. Instead, Nikita trades in cliches like:

“I broke their most important rule.”
“What rule was that?”

Or, in a flashback with her dead fiancé:

“Promise me one thing.”
“What?”
“Promise me this isn’t a dream that I’ll wake up from.”

Yeah, dialogue isn’t its strong suit, but the new Nikita pilot certainly has its moments. The opening kill (with Nikita in a red bathing suit) is spectacular, and sure to hook viewers in, and there’s a great scene where Nikita (pushing a room service cart loaded with the tasered body of a guy she wants to question) comes face to face with Division’s nastiest cleaner in a hotel hallway, and their standoff is interrupted by a family walking between them. Another standout moment finds Nikita, while all of Division hunts for her, walking right up to former boss Berkeley at a fancy Washington DC shindig and threatening to hit him where it hurts the most. “My feelings?” he asks, sarcastically. “No,” she replies, “your funding.”


Berkeley is his reliably slimy self, and clearly relishing the role. Maggie Q looks hot, and gets lots of opportunities to parade about in bras or bathing suits. The script for the pilot doesn’t afford her the opportunity to explore much character depth yet, though. Shane West, who starred opposite the original TV Nikita, Peta Wilson, in The League of Extraordinary Gentlemen (for which both were woefully miscast), plays Michael, the agent in charge of training new recruits at Division. West positively drips Evil, and I was prepared to write him off as a ham-fisted over-actor, but his over-the-top approach actually blinded me to an interesting twist with his character that I probably should have seen coming a mile away, so perhaps there’s more to him as an actor than seems to meet the eye in the pilot. 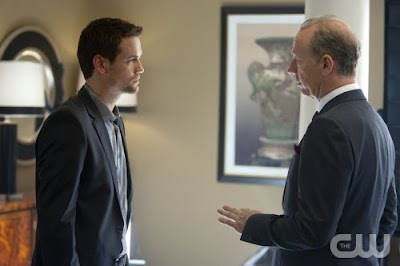 Nikita describes Division as “a US weapon that the United States has lost control of.” Instead, she insists that the agency takes its wetwork contracts from big corporations and oil companies–the worst of the worst! Furthermore, their target this week is an African diplomat who will do great things for his people, but probably kick out the oil companies. It’s always African diplomats in this sort of scenario. (See: The Bourne Identity.) All that makes Division a pretty generic Evil Organization for this day and age, but it’s also modern narrative shorthand to justify her outsider status and her hellbent desire to take apart her old bosses. In other words, it’s SD-6 all over again. The Alias references are inevitable, but Covert Affairs has shown that it’s definitely possible for other series to carve out their own niches within the Alias subgenre. The Nikita pilot wasn’t as promising as that show’s, but despite its flaws it was promising enough (especially a good last act twist involving the Alex character) for me to tune in again next week. (Even though it feels a bit weird to be watching The CW again, for the first time since they cancelled Veronica Mars, in my thirties, seeing all those ads for stuff like Gossip Girl and 90210!) After all, the Nikita concept basically comes down to a hot girl with a big gun (which means the pilot delivered exactly what was promised in that sexy advertising campaign), and there will always be a certain appeal in that...
*An influence that came full circle when Edward Woodward guest-starred in a recurring role on the final season of the USA TV series. 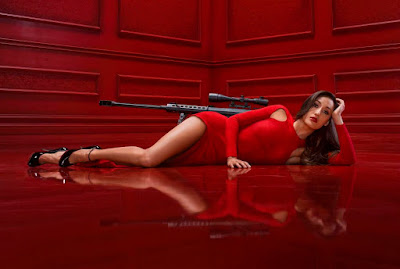 Wow! Didn't know about the Black Cat films. Will have to get them from Amazon.

My verdict is still out on this one. I was just chatting today about how Shane West is no Roy Dupuis, and also why in the world did they decide to bring in characters from the TV series if they aren't acknowledging the world of the TV series? But I'll give it a few more episodes at least. Now that it's going on hiatus, I finally decided that I do actually like Covert Affairs (and in case you didn't know, the full version of the Covert Affairs theme song was just made available by the artist, Apple Trees & Tangerines)

Happy to be of service, Bish!

Yeah, my verdict's out too, Rebecca... All it's got me for so far is tuning in for the next episode. We're on a week-to-week basis right now. I think they probably threw in characters from the old TV series, like Michael, for the same reason they put in ones from the movie(s), like Amanda, and so deliberately homaged Besson's film with that robbery: as little easter eggs for fans of previous incarnations. But as you point out, that street runs two ways, and they actually risk alienating those fans if the new versions come up short of the old ones. Anyway, this Michael seems as different from that one as this Nikita is. I think we have to look at these nods as references and nothing more.

Thanks for that tidbit about the Covert Affairs theme song! I will download it. I was wondering who performed that! And I do really like that show.