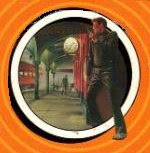 Deadline files two reports today on Robert Ludlum adaptations.  First, the trade blog reports that writer Jesse Wigutow has signed on to do a quick rewrite on Summit's remake of The Osterman Weekend.  Presumably the draft he'll be polishing is Simon Kinberg's, since Deadline asserts that Kinberg (who at one time was set to make this his directorial debut) is still involved as a producer, along with Peter Davis, Bourne Identity director Doug Liman (who probably deserves his own blog label by now, since his name comes up here so often) and Jeffrey Weiner, who controls the rights to Ludlum's books.  As previously reported, RED director Robert Schwentke is circling the project, and apparently the purpose of this rewrite is to entice him to commit to it as his next film. Yes, please! Bring on more Ludlum movies, especially while the most promising one of the many in development, The Matarese Circle, is tied up in the hell that is MGM at the moment.

Second, and perhaps more interestingly, as though there have been several mini-series, there has never been a TV series based on the works of Robert Ludlum before, Deadline also reports that just such a series is now in development at CBS. According to the trade blog, Anthony Zuiker, the creator of CSI, is developing a spy series called Treadstone. Treadstone "centers on the workings of Treadstone 71, the black-ops arm of the CIA featured in the Ludlum novels. Yes, that's the shadowy group for which David Webb worked in Ludlum's novels, with whom he created and assumed his more famous identity as assassin Jason Bourne. Deadline doesn't indicate whether or not this Treadstone will be more closely affiliated with the organization in Ludlum's novels, or the one in Universal's recent Bourne movies. Whereas the motivation behind Treadstone in the novels is basically heroic, the Treadstone of the movies is a much more sinister organization.  It was also, I believe, officially shut down by Brian Cox's character, Abbott. If the series takes place in the movie universe (which seems likely), then it would make more sense to feature a reactivated Treadstone under new leadership than for it to be a prequel to the films set in the late 90s or early 2000s.  I think this is actually a really good way to keep the brand alive while the studio figures out how to progress with the Bourne film series without Paul Greengrass and very possibly without Matt Damon.  Depending on how closely the TV show is tied into the film universe (would Joan Allen do TV?), it could also serve as a breeding ground for new agents to carry the film franchise.  The project has a script commitment from the network, and considering Zuiker's involvement, I'd say it has a good chance to progress further quickly. John Glenn (Eagle Eye) is writing the pilot.
Posted by Tanner at 6:45 PM