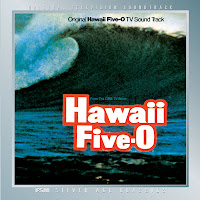 Well, I suppose it's not really spy music, but I think a lot of the tracks on this album actually come from Hawaii Five-O pilot episode, "Cocoon," which was a spy story (review here).  And chances are this will be of interest to a lot of readers of this blog and fans of Sixties and Seventies TV nontheless.  Film Score Monthly has released composer Morton Stevens' original soundtrack album, first released on LP by Capitol Records in 1968, on CD for the first time.  Happily, according to FSM, "unlike many TV albums of the 1960s which involved new arrangements and re-recordings of series themes, the Hawaii Five-O album was drawn from the actual TV recording sessions. Working with his friend and album producer Mel Taylor, Stevens chose to include a balance of both dramatic underscore and more radio-friendly jazz and rock material from the series." Since the program on the CD is exactly the same as the LP, it only contains about half an hour of music.  Therefore, FSM is offering it (through Screen Archives Entertainment, where you can also listen to samples) for a bargain price - just $12.95. Unlike the original LP, FSM's release also includes the authoritative liner notes we're used to from the company. Read more about it on FSM's website.
Posted by Tanner at 6:54 PM