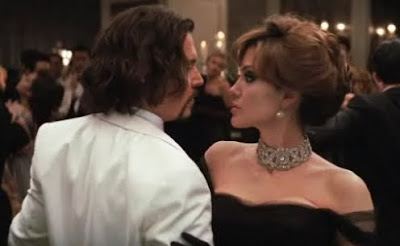 Yahoo! has the trailer up for Florian Henckel von Donnersmarck's long awaited follow-up to 2006's Oscar-winning The Lives of Others.  We've been following the long and circuitous development of this film for quite a while (it was once set to be a Tom Cruise/Charlize Theron vehicle; now it stars Johnny Depp and Angelina Jolie), and I'm excited to see it finally coming to fruition.  It certainly looks nothing like the serious Lives of Others; this is a very different type of spy film: light and fluffy, taking obvious cues from the likes of Charade and North by Northwest.  Personally, I love this trailer (even despite the two leads' oddish, iffy-sounding accents), though I suspect a lot of people won't.  This type of film hasn't been successful lately, but hopefully the two biggest movie stars in the world can change that trend.  It's got beautiful European scenery, beautiful people, trains, gunfights, rooftop chases, boat chases and General Orlov himself, Steven Berkoff.  What's not to like?  Best of all, the film also has Timothy Dalton, though I didn't spot him in the trailer.  The Tourist is a remake of a 2005 French film called Anthony Zimmer starring Bond Girl Sophie Marceau.
Posted by Tanner at 1:01 PM