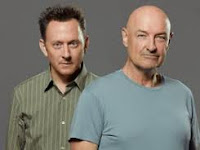 The Vulture reports (via AICN) that J.J. Abrams is collaborating again with Alias writers Josh Appelbaum and Andre Nemec (the team behind the Mission: Impossible 4 script) on yet another spy TV series.  The twist on this one, which Lost fans will relish, is that it pairs the two coolest actors from Abrams' cult phenomenon Lost! The blog reports that the trio "began pitching a comedic drama to the networks that would have Michael Emerson and Terry O'Quinn — a.k.a. Benjamin Linus and John Locke — playing former black-ops agents."  The blog adds that the series would be called Odd Jobs and contain a healthy dose of humor.  It's not clear if this is the same concept that O'Quinn floated last spring in which he and Emerson would play suburban hitmen.  The two concepts certainly could blend together: former covert operatives turned suburban hitmen.  Whatever it is, those two actors have demonstrated an amazing chemistry together, so I'll be on board!
Posted by Tanner at 1:34 PM