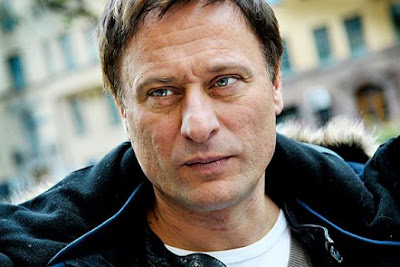 Well, that's not really accurate.  But Michael Nyqvist, the actor who plays crusading financial journalist turned amateur detective Mikael Blomkvist in the Swedish movie of Steig Larsson's The Girl With the Dragon Tattoo will be playing the villain in Brad Bird's Mission: Impossible 4 (or whatever it's called), and Daniel Craig will be playing the part of Blomkvist in David Fincher's American remake of The Girl With the Dragon Tattoo, so he's sort of the Swedish Daniel Craig...  The Hollywood Reporter reports that Nyqvist will join the illustrious pantheon of memorable villains from past Mission movies including Phillip Seymour Hoffman and... and... whoever played the villains in those other two movies. (No, of course I remember who played the villain in the first one. It still pisses me off to this day!)  Actually, the trade's specific quote is that he will play "one of the lead villains." Hinting either that there are still others left to be cast, or else that one of the good guys we already know about (Simon Pegg, Ving Rhames, Jeremy Renner or Paula Patton) turns out to really be bad.  Anyway, I really liked Nyqvist in The Girl With the Dragon Tattoo, so he seems like a good choice to me.  As for those mysterious and possibly imaginary other villains, may I suggest Antony Zerbe?  He played all the best villains on the TV show!  (Or maybe Ed Asner?)

The same article also reveals that Vladimir Mashkov (who guest starred on a couple of episodes of Alias) has joined the cast as well, but provides no details on the nature of his character.
Posted by Tanner at 2:57 AM