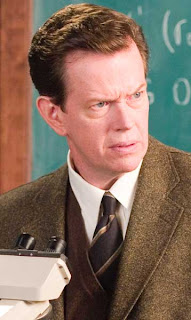 The Burn Notice formula where every season Michael meets another player, slightly higher up on the ladder toward the people who burned him, and that character pulls his strings for the season before being killed or otherwise ousted, is wearing thin.  But at least the next rung on the ladder is an intriguing one.  Deadline reports that Dylan Baker has been cast in a "key role" on the series.  According to the trade blog, "He will appear in the fourth season finale and is rumored to possibly recur next season. Baker will play Max: no stranger to the corridors of power, Max is a brilliant, plugged-in operator from Michael's (Jeffrey Donovan) past who may soon hold the keys to his future."

Personally, I like the idea of Jeffrey Donovan facing off against Dylan Baker.  Baker may not be a physical match for Donovan, but he can easily portray a shrewd one.  I'm a big fan of the character actor, who had a great small but crucial role in the final third of The Tailor of Panama, a superb John Le Carré adaptation starring Pierce Brosnan.  Baker is probably best known to wide audiences as Peter Parker's professor Curt Connors in Sam Raimi's Spider-man films.  The character was being set up to eventually become the villain The Lizard (if the movies followed the comic book continuity, anyway), but has now apparently been thrown out along with the rest of the recurring cast members just as that villain finally takes center stage for the new "reboot" movie, which is too bad.  Hopefully the Burn Notice role proves to be a decent consolation prize.
Posted by Tanner at 4:18 PM