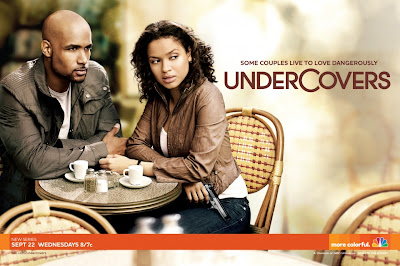 Spywatch: J.J. Abrams' Undercovers Premieres Tonight
The 2010 spy season continues! Remember to set your DVRs or even (gasp!) tune in live at 8/7c tonight to catch J.J. Abrams' latest spy series, Undercovers, on NBC.  Those ads really don't do much for me, but I'm not going to miss Abrams' first TV directing gig since the Lost pilot, and the guy has a good track record with spies in my book, having directed the best entry in the Mission: Impossible film series and created Alias. Let's hope Undercovers can live up to that CV... Abrams co-wrote the married spies pilot with Josh Reims; Boris Kodjoe, Gugu Mbatha-Raw and Gerald McRaney star.
Posted by Tanner at 12:46 PM