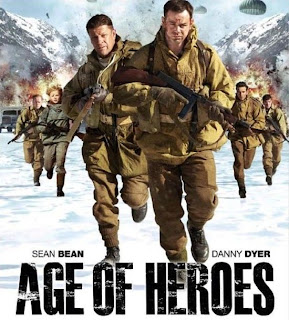 Well, who would have thought it?  One of those many Ian Fleming movies in development has actually come to fruition!  I first reported last March about Age of Heroes, the British film about Fleming's "Red Indians," the 30 Assault Unit he formed while working for Naval Intelligence during WWII.  At the time, I had no idea how close that film actually was to production.  (Often things reported in the trades take years to actually get made, if ever.)  Well, apparently this one got made.  It actually filmed over the summer!  There are even some reports of an October 1 UK release date, which is right around the corner.  (Can anyone in the UK confirm this?)  When I wrote that first report, I speculated as to how large a role Fleming would have in the picture (since he didn't actually participate in the commando unit's raids, as was depicted in the 1990 TV movie Spymaker: The Secret Life of Ian Fleming starring Jason Connery) and who would play him.  Well, now we know thanks to both the IMDb and a Fujifilm magazine story reprinted on the Sean Bean fansite The Mighty Bean (who also supply that poster) that James D'Arcy is playing Fleming.  How large a role it is is still to be determined.  According to that article:


"During the filming James D’Arcy, whose previous roles have included British navy First Lt. Tom Pullings in Master and Commander (2003), Father Francis in Exorcist: The Beginning (2003), and numerous British TV roles, offered some brief thoughts on his role as Ian Fleming to the Norwegian press. He said: ‘Fleming lived an unreal life. It’s strange, really, that the story of his life isn’t better known’." 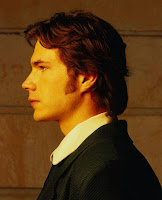 Hm. I can't recall him from Master and Commander; the role I most immediately associate with James D'Arcy is Sherlock Holmes, whom he played in an ill-received (and decidedly non-canonical) 2002 TV movie called Sherlock: A Case of Evil (which actually pre-figured both the Robert Downey Jr. film and the current contemporary TV version in some key ways).  He doesn't look much like Ian Fleming, but then again he doesn't categorically not look like him either, so make-up should be able to do the trick.  Fleming has previously been played by Jason Connery, Charles Dance (who was a dead ringer for the author) and Ben Daniels.
Posted by Tanner at 6:06 PM